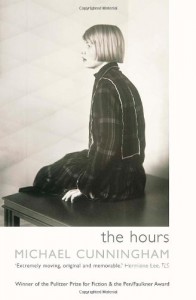 The Hours curiously begins with an ending. Yet, before that ending, one the first leaflet one can note a quote from Jorge Luis Borges poem 'The Other Tiger.' It is fascinating that Michael Cunningham chose to use such a quote, considering Borges' fascination with labyrinths and metalanguage. For Cunningham has, in essence, created a convoluted labyrinth purely out of metalanguage. A labyrinth that ends precisely where it begins as it weaves a path through history. Yet this labyrinth is also in some degrees a maze in how it darts back and forth across time.

'The Hours' was, in fact, the original suggested title of Woolf's work, addressing the manner in which her novel was to be set across the course of one day. Cunningham's use of the title reflects upon this and changes it. His work is a novel chiefly concerned with time and human perception, as is Mrs Dalloway, yet his novel spreads itself across several chronological points, connecting three female lives across time, each life connected by the strand of literature and socially oppressive claustrophobia. And yet, like Mrs Dalloway the novel essentially revolves around the premise of an important party, shifting the tone and ideologies slightly to adjust for modern settings.

As a reader, one can generalise as an honest assessment that most male authors fail to fully grasp that any character is constricted by varying levels of social expectations and imposed norms of culture or language and so on. And as such, female characters tend to be written rather poorly, as males with different bodies (men who can undergo childbirth) or follow the old sensitive, damsel in distress archetype. Yet, interestingly, Michael Cunningham seems to succeed at creating organic female characters, purely because across the entire novel there is a strong recollection that all characters suffer in varying degrees. And to this purpose it is the common threads, not the differences, which are his uniting factor in creating human interfaces for his novel's themes. Interestingly, one could note how he reflects and twists the suicide of Virginia Woolf for his later characters. Clarissa becomes the partner who must care for a spouse who no longer wishes to live, thus giving her a greater sense of agency as a character.

The Hours is a book of great subtlety, handled deftly. There is almost a touch of [b:Atonement|6867|Atonement|Ian McEwan|https://d202m5krfqbpi5.cloudfront.net/books/1320449708s/6867.jpg|2307233] about the entire work in its tone and handling of shifting perspectives across time. One of the key issues brought up by such modern and post-modern works as this is the idea of the extent to which human lives are narratives with differing faces. The public narrative of Jonathan Terrington is not necessarily the narrative which I truly believe exists as my narrative (an idea echoed in Borges' parable Borges and I). What The Hours serves to do on this front, as a pastiche of the modern and postmodern, is to reflect upon the idea of the legacy of narratives, and the ways in which such narratives can be taken up and adopted by others in future eras.

Addition:
While some might like to analyse the gender roles (non of which are traditional) or find them offensive I overlooked such ideas in favour of the more metafictional ones. Such ideas were discussed in our university tutorial on this novel, connected to the ideas we had been discussing around the idea of how texts define identity and whether perceived identity is separate to the self. A concept observed nicely by Borges in his essay Borges and I.
Tweet