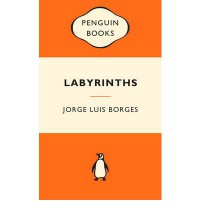 Jorge Francisco Isidoro Luis Borges not only possessed one mouthful of a name but a great literary talent. There is much that could be criticised in his manner and style, in many of his pieces his 'fictions' come across as formulaic, mathematical and structured, which at times fails to allow emotion to be properly conveyed. Yet Borges was a conscious and thinking author, despite appearing to err on the logical side of the writing spectrum, addressing his fictional work as a means to explore deep philosophical or metaphysical ideas and concepts. What is further fascinating is that Borges also created some fictional book titles, referenced in an academic way to add to

There are some who have said that Borges mainly wrote such very short and compact fictions (I consciously refer to these as 'fictions' because they lack the same narrative structure as a typical short story) because he possessed a degree of 'laziness' as a writer. Not that Borges did not possess a work ethic, after all he wrote many deeply thought out stories, but more that Borges did not have the patience and desire to write longer and to go through the paces of working out

If one looks at the period in which Borges was alive - 1899 to 1986 - one can notice pretty quickly the significance. Borges was alive through both World Wars and the Cold War. In that sense, Borges is the quintessential 20th Century author. He, more than anyone, shows in his writing how the events of his era defined his ideologies and shows off aspects of modernity and pre-post-modernity.

Borges is an author who not only thinks deeply but experiments. Each of his fictions play on different genres, crafting parodies of detective fiction, theological debate, fantasy (or magical realism), horror and so on. Borges sometimes moves into creating a pastiche, but more commonly his parody is actively pushing against genre boundaries. He will start the reader on a particular path, only to pause at a set point and reveal to the reader how and what he is doing in regards to genre.

There are a selection of different themes that Borges regularly repeats. The word 'labyrinth' or some variation often makes its way into his lexicon along with mirrors, libraries, novels, theology, tigers (or jaguars) and knives. Each of these words helps provide a particular intertextual and metalinguistic function, linking Borges entire oeuvre together. Indeed, it is fascinating that the title of his work here is 'Labyrinths' considering the regularity in which the phrase appears.

It is also interesting that considering the title, the piece I found most appealing in this work was 'The House of Asterion'. In this, Borges takes a look at the tale of Asterion The Minotaur from a new, modern perspective. Many know the story of the labyrinth and Daedalus (interestingly Borges himself becomes a kind of Daedalus of fiction) but Borges takes that story and breathes new life into it, though the story itself is only two and a half pages long.

Unlike a maze, a labyrinth has only one set path with no choices and one exit that serves to be the same as the entrance. Borges himself constructs labyrinths out of text, questioning as Plato did, whether there is one real version of everything that is corporeal. A real version existing elsewhere, beyond reality. This does not mean that Borges finishes where he began, necessarily, however his work does lead the reader on a set path before causing them to look back and recognise that the way back is the very same way they have come.

The work of Jorge Luis Borges is a must read for any individual with a deep love for important literature classics. His work, for its sheer influence on modernist authors and postmodern authors and on to the current era, should be recognised as tremendously influential and remains important today. Though Borges, I have come to see, is more of an acquired taste, his work sparkles from time to time with truly appealing thought and wisdom.
Tweet