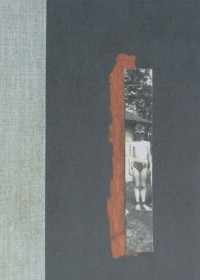 If, possibly, one could describe what Nox is as a work of abstract poetry it could possibly be considered a kind of meta-elegy. Because, in many different ways Nox is a haunting work that talks about the elegiac mode while existing as an elegy in and of itself. The title itself appears to be from the Latin for different variations of 'night' or 'nightfall' therefore reflecting the age-old idea of death being like sleeping or passing into shadow.

The book itself is structured like a journal with the interesting gimmick of accordion folded pages set inside a box, rather than a true hardcover. There are scraps and fragments of Latin dictionary definitions alongside handwritten and typed notes. At the same time a poetic commentary from Anne Carson herself exists intermittently and in many regards this fragmented, fractured prose poetry seems to show a sense of grief and loss to a far greater extent than any structured eloquent piece of work could. That is not to say that Carson lacks eloquence, indeed, she is very well versed in how to utilise language, it is simply that her work possesses a raw emotionally jaggedness that comes across to the reader.

The fact that Nox does not even appear like a true book is the most obvious statement made by Anne Carson to the reader. Though there is a sense of the gimmick as noted above there is also the sense that Carson attempts to school the reader that grief destroys all sense of form and the known. That, when night falls upon a soul, there is a sense of total destruction of normality or formality, at least initially.

Anne Carson herself describes the book as being "'based on a poem of Catullus...whose brother died in Troy when Catullus was living in Italy...In my book I printed out the text of the poem, and then took it apart...I dismantled the Catullus poem, one word per page, and I put the Latin word and its lexical definition on the left-hand side, and then on the right-hand side a fragment of a memory of my brother's life that related to the left-hand side of the page. Where the lexical entry didn't relate, 1 changed it. So I smuggled in stuff that is somewhat inauthentic. But it makes the left and the right cohere, so that the whole thing tells the story of the translation of the poem, and also dismantles my memory of my brother's life'(sourced here)." In retrospect it is apparent as to how Carson has used form and her sensibility to convey this other poem in respect to her own experience. Isn't that how all readers must take literature? In connection to their own experience?

Other reviews have also noted the form of Nox transforms the book into more than a book. It becomes a document or an artefact, a work of memory and a monument to a lost life. All of which is in general the aim of the elegy. Yet the fact that Carson can talk about other elegies and about mourning as an act makes this work a kind of meta-elegy as already noted. So this book becomes more than merely a work of non-fiction where Carson describes her reactions to hearing that her almost unknown brother (who hurt her mother) has died. It becomes a work of non-fiction for all those who have lost someone in their lives. And therefore it becomes a work for all those who read literature because it is concerned with both life and death.

"The very essence of literature is the war between emotion and intellect, between life and death. When literature becomes too intellectual - when it begins to ignore the passions, the emotions - it becomes sterile, silly, and actually without substance."
- Isaac Bashevis Singer