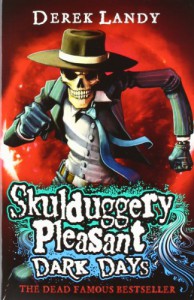 While I am certainly enjoying the quirky tone of Derek Landy's work in this series and his children's fantasy ideas, these are hardly the best children's fiction books I have read. I think I've realised why, having completed this novel.

The major issue is that Derek Landy, in his quest to put his ideas and humour out there, seems to tell far too much rather than show. Which leads to situations where the action is being told to you 'he threw the chair' or 'he threw a fireball.' The better option to me would be something more like, 'a fireball filled the empty space as (X character) moved.' Something more descriptive and that shows the reader that action is happening by being more fluid. I don't really know how it could happen better without being lengthy but the action does tend at times toward telling over showing unfortunately.

The strength of Landy's writing however is that his work has created a series of interesting characters with various levels of complexity. Accepted, his villains are far less complex, and far too often he steps into stereotyping or repetition in regards to motives and the emotions of his characters (or telling the reader how they feel) but on the whole his characters are far better than most novels aimed at juvenile readers.

The plot of this novel follows firstly Valkyrie's search for Skullduggery's head so she can rescue him from another dimension. Then it follows as they all stop a disaster from destroying a bunch of mortals. There is a real revelation regarding future plots, and hopefully things start to become more even and with more showing in future novels...

On the whole a decent book to give to a 9 or 10 year old reader. Some older readers may appreciate the humour and action in the novel also, however they will most likely find some aspects a little aimed at more immature readers than anything. It certainly is a patchy novel with good patches and bad patches and does not flow as well as other books I've noted that I prefer. It's decent enough to be a cut above some other series, that said, and to keep me reading.
Tweet