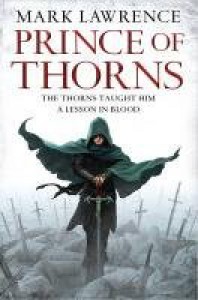 Prince of Thorns incredibly underwhelmed me as a reader. Let's get it out of the way that of course this is an opinion, by no means fact. But I do intend to provide a strong argument as to why I believe in my opinion.

I will forgive the first 50 pages, which let me down with their rougher quality prose. The prose on the whole turning out to not be a strong point to the book overall, though some suggest it improves in later books and it's never kept me from liking a book. I will also admit that the premise did not appeal to me on the whole, not being a fan of the whole move towards the grim/dark type of fantasy novel.

The first problem is, for me anyway, Mark Lawrence didn't quite have the right type of skill to keep me invested in this novel as a reader. In many ways, with how extreme Lawrence has taken this it seems designed to sell. Not that that in itself is a negative - all authors write to sell books to a degree (they want people reading them after all!). But to me, this came across as a little artificial, as if the author purposefully went out there to write a book populated with vile characters and little moral fibre. Which I think reflects a lot as to where society are going, with beliefs in the non-existence of evil and so on. And oddly, the way it was done left me feeling...nothing and empty.

I cannot give this one star in honesty, due to the fact that to give it one star would be to state there was no value in this book. I feel that the very fact that Lawrence could write a novel which featured such a villainous character as the hero and cause the reader to appreciate him, was in itself skilful. The fact that the pages kept turning as I read with the frenetic pace, once I warmed to how the novel worked, was also a positive.

I would recommend this novel to those who like villainous protagonists. Who like misogynistic narrators who kill, steal and rape (basically Jorg's a younger, more unbelievable version of Alexander the Great). As for me, I don't particularly care for vile characters when the only point to them is to be vile. It's why I didn't care for another well written but depressing novel in [b:Gone Girl|8442457|Gone Girl|Gillian Flynn|http://d202m5krfqbpi5.cloudfront.net/books/1339602131s/8442457.jpg|13306276]. It's why I don't care for some of G.R.R Martin's novels - when it is emphasised. Because to me characters are defined as having particular characteristics for a reason and I don't know that I can fully see that reason. Maybe I will in the following novels...
Tweet