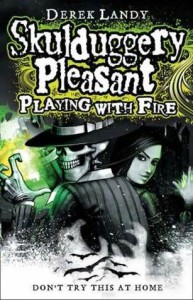 Like the first Skulduggery Pleasant novel, Playing With Fire is an enigma to me. I know that Derek Landy was aiming to write a children's fiction novel. I know that children's fiction at its best should appeal to a variety of age groups - that it should not be static, unforgiving or patronising. However, the enigma is that Landy's novel is one which is, fractured and unstable. I welcome the use of a fascinating female lead (I call her the lead as, through her perspective, we see various changes occur, hinting that she is the actual protagonist rather than the novel's eponymous hero), but for the most part this is a novel of frustrating contradiction. Though I do believe, and hope, that the series may improve because there are aspects to these books which fascinate me. Though not quite as much as say: [b:Revenge of the Witch|298567|Revenge of the Witch (The Last Apprentice / Wardstone Chronicles, #1)|Joseph Delaney|http://d202m5krfqbpi5.cloudfront.net/books/1362370505s/298567.jpg|3496896].

So, why is it that I'm saying I find this book contradictory. Firstly I'll mention the prose and humour. I believe the humour is one of the best aspects of this book, it allows one to know that, as with a book like [b:The Bad Beginning|78411|The Bad Beginning (A Series of Unfortunate Events, #1)|Lemony Snicket|http://d202m5krfqbpi5.cloudfront.net/books/1370055267s/78411.jpg|1069597], the author intends to poke fun at a few areas. Indeed, one could probably perform a more detailed and brilliant expose` of this novel analysing how Landy 'sends up' the fantasy and children's book genres. Unfortunately I am not that person - not right now. Yet, that humour occasionally feels, slightly off-centre. And by off-centre I mean it diverges from its target audience. The same goes for the prose, which is the vehicle of said humour. The range of variation in jokes and prose indicated to me that, perhaps, Landy hadn't quite found his niche to settle into when writing this book. That he didn't quite know whether to write for younger, say 9 and 10 year olds, or write a story for older 13 year olds and up. It seems to me that he may have opted for the older audience in later books.

That all said, if you are into children's literature (or in this case hybrid YA/children's lit) then I recommend these for the ideas more than the actual storytelling (which is average to mediocre at best). The plot, for this book, features Valkyrie and Skulduggery saving the world from the threat posed by necromancy and brining a hybridised corpse back from the death. There are savage vampires and spiders and all kinds of gory, creepy things. But remember, it's all funny. Don't you find guts and blood and gore funny?
Tweet