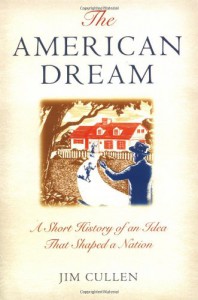 History is a fascinating area of study, although it is often too much divorced from the literature and established media created in its specific sectors. The most fascinating aspect to history to my mind is how history reflects upon the here and now - that like quality literature it reflects upon humanity. There are some who would argue that history is water under the bridge - to use an idiomatic phrase - and yet why is it that in our modern times we so often find ourselves repeating, insanely, the mistakes of the past?

What Jim Cullen aims to do in this work of historical narrative - popular history - is to record how the concept of the American Dream has shaped American history in particular. For a short book, in terms of page count, Cullen packs plenty of detail, description and thought into his argument. Some might find it too personal to call it a true historical account but I would counter this thought with the fact that history is nothing if not a creation of multiple personal accounts. What Cullen simply does is write his own personal thesis in regards to that and as such creates a work of scholarly debate that most individuals could read.

In the opening to this work Cullen quotes from John Adams, a historian - popular many decades ago - who wrote of “that American dream of a better, richer and happier life for all our citizens of every rank, which is the greatest contribution we have made to the thought and welfare of the world.” Cullen notes that prior to Adams' use of the term in the 1930s there seems to have been no use of the phrase 'American Dream' in popular culture and yet since there has been a major blossoming and use of the phrase. It was prior to this, Cullen argues, a subconscious dream - one understood and culturally centred but not visibly named.

"One of the greatest ironies - perhaps the greatest - of the American Dream is that its foundations were laid by people who specifically rejected a belief that they did have control over their destinies."

Jim Cullen begins his narrative with a look at the Puritans. His argument could be seen as repetitive and wordy (as throughout) but his writing has a personable touch to it and draws in the reader, regardless of length. That aside, his style is also quite elegant, though he admits openly that he is unabashedly a supporter of the Puritans - not in line with popular veins of thought. The reason for this he states is found in the American Dream. Essentially, Cullen's argument boils down to the sense that the American Dream is made of multiple dreams and the Puritans themselves had a dream for freedom which defined America - that from the beginning freedom helped create this new country.

Likewise, when Cullen moves toward the Declaration of Independence and the American Civil War he also notes the dreams involved in regards to freedom. There were individuals who clearly believed they had freedom already and had to learn that they did not in order to dream for freedom and there were others - slaves - who had no freedom and therefore dreamed of it.

Equality, however, is different to freedom. This is one of the best points I have heard raised around this topic and the American Dream when Cullen talks about the Dream, slavery and also references the hardships of women. Martin Luther King Jnr. reappears, as is inevitable when talking about dreams and American creeds. Cullen makes the point that reaction to Martin Luther King Jnr. has been mixed throughout history (and not simply for racial reasons) - pointing out his reported character flaws. That said, Cullen stands firm in indicating how for all his faults Martin Luther King Jnr. had a dream and he tried his hardest to live by it and for that deserves respect.

One of the final dreams Cullen touches on is the dream of house ownership and the capitalist success associated with this. He notes how it has long been a dream for individuals to make their mark on a land area or site and to somehow gain something from that. Legacy seems to be a huge thing in regards to humans since we live such short lives compared to our world itself. So to make our mark seems in many regards to be the perfect act of defiance. There is the darker side in regards to capitalism and commercial success that Cullen touches upon however.

“One of the principal attractions of the American Dream, and its major moral underpinning, is that everyone is eligible.”

It has long been noted by historians as to the existence of what are called 'Robber Barons'. Those wealthy entrepreneurs and men who cheated the system. Those content to stay rich and in their luxury while the world burned around them. The American Dream, Cullen points out, helped to contribute to this. With everyone being eligible for the Dream it can be argued that everyone can in theory become equal and rise to the same success as anyone. Of course we understand, Cullen notes, that in practicality people want supremacy: not equality.

In the end, Cullen's argument seems to boil down to an interesting mix. On one hand he notes that there is much good in regards the overall picture of the American Dream. At the same time he notes that the American Dream can so easily become the American Nightmare when believed in to the point of excluding others in life. It can be so easy, it is suggested, for the Dream to become a simple form of reification - or a complex one if need be. Cullen's suggestion, therefore, is that individuals should learn that the Dream in its modern form allows for humans - particularly Americans - to ask the difficult moral questions, with the Dream existing (or should exist) as a moral framing device.

My experience of the American Dream

Each nation across the world has its own particular symbolic aspects to history I have noted. Aspects that they hold onto currently. Australia also has her own particular history, a history connected to the legend of the ANZACS and the firm belief in mateship and community. These historical mythologies have turned Australia into what she is now and affect all her citizens unconsciously. I know of these ideas and yet I could not say how much they have shaped me, save to say that the particular Aussie brand of laconic good nature and humour have long been part of my world as have particular perspectives in life.

American culture has its own particular flavour. It is a much older nation than my own and the locations and cities exude that sense of having been lived in - of having been 'civilised' for longer. Australia has a sense of history, but it is to be found in the natural wilderness and in the sacred artwork of its Indigenous communities, not in the cities and towns. Yet I feel I can state that the American Dream has defined and shaped America to a large extent.

Mentioning the phrase to many individuals, we found that the answer as to what the American Dream was, returned similar results: life, liberty and the pursuit of happiness was obviously Jefferson's way of putting it and it has resonated through the ages. Now people might say it as 'the opportunity to be whatever you want' but they mean more or less the same thing. And though they may believe it is a symbolic idea, the American Dream to me is as alive as Jim Cullen references.

Though he did not touch on the baseball or on broadway I believe through my visits to both events it is visibly active there. I believe you can see it when you walk into a fast food store or cinema. I believe you can see it in people walking down the street. One massive group of people living in a city and several dreams all connected to the one American Dream - to have a better life. After all, dissatisfaction is one thing that all humans - I believe - have in common. Why else are superhero or rags to riches stories so popular: dissatisfaction.

I admit that while we were over in the states we met Jim Cullen personally. I had read part of his work already and he struck me exactly as his writing came across: affable, friendly, academic but not in a distant sense. He was undoubtedly an intellectual type, but one who was more concerned with connecting modern ideas such as media and social enterprises etc. with history. In fact one of his books is all about how actors are historians in a sense. We did get to hear from him in regards to the American Dream and a reading from a work he was currently writing. He also signed my book.

But of most importance was what I particularly took away from that session. Though the American Dream has a specific American flavour, it still affects me. We have our own national dreams and beliefs. We have our own ways of living life. But we still draw from American authors and television shows. We still buy into American advertising - which uses the language of the dream. Because essentially there is something so human about dreaming and I think that through our shared sense of dreaming the American Dream becomes part of the Global Dream.
Tweet