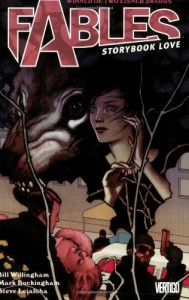 Fables Volume 3 is the precise definition of what a graphic novel should be in my eyes. And I use graphic novel in distinct difference to the concept of a comic book. It's smart, adult and has a distinctive art style, which while not the glossy art I've loved in other works, adds its own special tone to the work I've read so far in the series.

Storybook Love continues the adult themes and the unique ideas of the previous novels in the series. In this particular novel several references are made to previous fairytale lives of the characters (very much in a similar vein of thought to Once Upon a Time - something I've also enjoyed) but most of the action takes place in the world of Fabletown. The idea of what happens when a mortal journalist finds out about the world of Fables and threatens to expose them is a fascinating side story in this overall tale of romance and fairytale world balance delivered by Bill Willingham and his team. Although, one wonders whether a better solution to the issue might have been to give the journalist to the Daily Planet and help them figure out who Superman really is. I mean they call themselves the world's best journalists and Superman's under their eyes? Really?

I've chosen to call this a fractured fairytale - which is a term I've borrowed from elsewhere. I don't know where exactly. Maybe it escaped into my world from another one. Basically what it does - and despite some claims to the contrary I found this to have relatively strong dialogue - is take faiytales and use them as they have always been used. To tell a moral about reality, and of course in this instance how modern reality works. Definitely a highly recommended graphic novel and series (at least to this point).