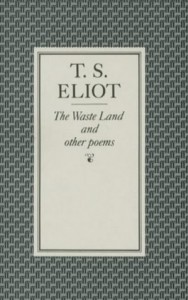 My ode to T.S. Eliot

T. S. Eliot,
You walked among the stars
In your words,
light trails blazing.
Master of the modern,
Ruler of the poetic.
There is, and was, no poet to compare.
Your mythology and legend stand immense.

Behold the waste land of the world,
Behold the glorious prose of a world shaker.
Though some have called thee,
Mighty and dreadful plagiarist,
Such slander upholds your greatness,
The potency of your reinvention.
There is a power to you - in rewriting the eloquent

So behold T.S. Eliot.
A masterful poet.
One who walked among the stars
And brought the heavens a little nearer.
What more can a poet do?

There is a simplicity to the greatest poetry. And at once there is a complexity. There is a simplicity, in that the greatest works of poetry don't contain wordiness or explicitly state their intentions. They strip back language to allow for a nice flow and rhythm to what they are doing. But at the same time there is a complexity generated by a presumed sense of intent and knowledge. The poet assumes that you will get, from the scarcity of language used, what they are aiming to convey. And that is part of the beauty of language, that because the poet strips everything down, there is so much which you can read into and draw as your own understanding of what the poem is about.

And that is what I sensed in The Wasteland and the other poems. The Wasteland is universally accepted as one of the most important pieces of modernism - regardless of all the arguments about it being a plagiarised piece of fiction. For an interesting breakdown on that idea of plagiarism and literature read this article . And no matter how you read Eliot's work: as a reinvention of older myths and narratives; as a depiction of a destroyed post-war landscape and the people affected by that world; or as a beautiful piece of art; there is so much to gain from reading this work. It really all proves that simply because older ideas are drawn upon and referenced that it doesn't have to be stealing.

Upon further reading and analysis it has come to my attention that what Eliot does in this masterpiece is to both play off the worlds of the common peasants and bourgeoise with those who would be considered academic royalty. He sets up a comparison of white collar and blue collar workers, essentially creating a poem that works like a giant chessgame. In some ways a game of oneupmanship in which Eliot tells the reader that he is better than them but still sympathetic to them. This can be seen in the classical references to high forms of literary art that Eliot draws upon. But there are also elements in which Eliot shows that he is not supercilious and in fact appears to both sympathise and empathise with the proletariat working class (the second section for instance and in lines such as "consider Phlebas" particularly seem to suggest this).

Regardless of how you want to read it I challenge you to go and read one of the great works of literature. It is a notoriously difficult poem to understand and I know I got very little of it, but it was powerful and moving. And I am now looking forward to further discussion and dissection of this in upcoming classes. Isn't the greatest power of literature apparent in how it lives on after we have read it?