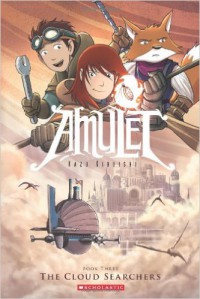 There is something so disappointing in a work of fiction that is almost excellent. Unfortunately for me personally this series to date has been one of those fictional works. The artwork is fantastic, the story ideas are solid enough, but the overall execution leaves the book feeling a little...awkwardly put together? Lacking? There is a sense that the book possesses for me an element of the staccato and therefore feels incomplete.

The tale of this series so far is that two children and their mother have been pulled from Earth to another world. A world of magical creatures and strange robotic contraptions. It's a kind of fairytale steampunk manga tale if you will. Anyway, the girl, Emily, in the story has been selected to become the next Stonekeeper in place of her deceased uncle. Apparently she's the only one who may be able to save the world from the deadly forces of the elf king. All of which is an interesting premise but the execution and dialogue has never quite been there enough to fully capture the promise that I sense in each of the stories.

To put it best I just cannot quite get emotionally invested in these yet. It's not the fact that it is a manga because I have read other manga novels which have enthralled me, despite having been translated works even. Maybe it just doesn't feel quite like what I hope it will, which is rather unfair to the book and I apologise to anyone reading this review for that. I apologise simply because this is technically a very, very good graphic novel series. If you don't feel compelled to read on after the first book then I don't know what you are missing.

It's rather odd, I keep feeling to read on after each book but yet the sense remains that I haven't fully been drawn into the series. I don't yet love the books like others do. Which is a shame because there are some series (say the Spook's Apprentice, which begins with [b:Revenge of the Witch|298567|Revenge of the Witch (The Last Apprentice / Wardstone Chronicles, #1)|Joseph Delaney|http://d202m5krfqbpi5.cloudfront.net/books/1362370505s/298567.jpg|3496896]*) which started off okay and became far superior later on. So, if you want a different type of graphic novel to read with animals, robots, magic and fairytale steampunk then I recommend this series immensely. I've just not quite found my own special spot for it in the shelves of my heart...

*You really should read this series if you haven't already**
**Sorry for plugging another book in on top of this one, I'm an avid reader I can't help it***
***Sorry for the asterixes, I really shouldn't be trying any humour or reviews after a night shift. I believe that staying awake during the night leaves you feeling sort of drunk...
Tweet