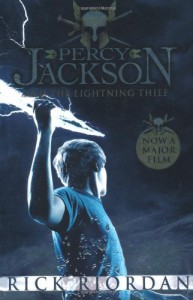 Okay I've deleted the place-marker review ladies and gentlemen: here for your entertainment is my new and improved review. Now with added humor - well I think so anyway.

Many people may look at my rating (before reading my review I presume) and question why I gave this five stars. 'Why would he give Percy Jackson five and deny literary masterpieces five stars. Why give this the same score as Lord of the Rings for instance? Well all I can say is that this is where the deceptive element of differences between books and five star rating systems enters into everything. When you rate anything and the rating system is limited in scope the ability to truly compare books on rating decreases. As I've said before I therefore tend to give stars based on entertainment, technicality and then throw elements of my rating out the window depending on the genre. However that is my 'boring' explanation, please read on for my more interesting explanation of why I like this book so much.

I've heard there's a phrase that's been circulating the written world of late. Something to do with the inner-goddess. You could say my inner-child liked this book so much or even better my inner-demigod. The fun of being eighteen is that you can still choose between the world of adolescence and adults. That way when I want to be flippant, sarcastic and immature in various ways I can consider myself a child and when I want to drive or watch action films I'm definitely an adult. So when I want to read a book like this that's aimed at children it's not too hard to read it from the point of view of a younger child (say a 12 year old).

I do however think that there are elements about this book and the series that adults in general would like. Even if they aren't in touch with that inner-demigod so much. But to take a more serious note I think that anyone would recognise the creativity in these books and find them at least 'alright' even if they don't like them as I do. The story of one boy discovering he has supernatural abilities due to his parentage when broken down may not sound unique and original (I mean Star Wars and many fantasy books have done that story before). However the uniqueness of this book comes from the way it tells the story: the incorporation of myth into a 'real world' style America; the telling of how Percy discovers his parentage; the narration by Percy himself; the new additions to the old myths; and the characters of this story.

I'd recommend anyone who is still young at heart, has children or is still around the YA target age to give this a go. I think that anyone else interested in mythology may find it interesting also (even if there may be a few flaws in the myths - it felt like it at times but I was not sure). The main flaw (and yes there is a flaw as any book written by a human must have) of this book is in the simplicity of the telling, it is not for all intents and purposes a deep, intellectual novel. It is however highly creative, imaginative, inspiring and general wholesome fun. So unless you're beyond any of those positive aspects then at least give the book a chance and read it.