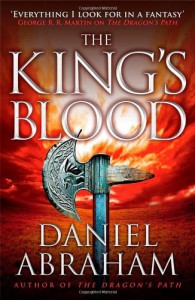 The King's Blood, like its precursor novel, may not be mind blowing fantasy but it is incredibly solid fantasy with genuine character depictions. It is precisely the type of fantasy (save for the addition of gritty features) that I, as a reader, appreciate.

The story takes the idea of the previous novel, in which a group of 'evil' priests serving a spider goddess aim to take over the world through establishing temples in different cities. All of which sounds like the plot taken directly from a strategy fantasy game. However it is the way in which Daniel Abraham crafts his characters and world that is undeniably skilful. He leads the reader on an up and down journey (full of Game of Thrones-esque blood and violence, what is a fantasy book without an execution or two these days?) in which no character feels like the hero, but the characters are still the heroes.

There is, to put it in easier terms, a sense that Abraham knows his character's psychology and he plays with that psychology naturally: Cithrin is the uncertain girl turned woman trying to establish her place in the world, Geder is the likeable yet odd hero of the kingdom given more power than necessary and played by the priests and then in the background we have Dawson Kalliam and his wife trying to do what is right for the kingdom. Marcus Wester takes more of a back seat in this novel, but he appears set up to take a more major role for the next novel.

It is not simply the plot or characters that I appreciate in this book. I fully appreciated the ways in which Abraham integrated themes into his novel. I believe that novels (particularly those that appeal as 'cool' books) can possess great educative power in the way they reach the often ignored subcultures. Fantasy may be frowned upon as a genre by a rather snobbish highbrow class, but what better way to reach the specific fantasy subculture than through fantasy containing deep ideas? I digress.

This is certainly a novel that aims to talk about the grand notion of truth and lies. Is something true, perhaps, when we believe it to the point of it becoming true? Is it belief that creates truth and lies? There is also the question of the falseness of the notion of nobility, the idea that nobility is an idea created for the purpose of segregation. Then there is also an exploration of the ridiculousness of social politics as regards the undesirability of a noble family, the sense that scandal somehow makes individuals less than human. In other words there is a solid exploration of what it is to be 'other' or the outsider. Further, the novel also examines the power of words and language as regards what exists and what is truth. Does being named as King, Regent or Marshall change you or does it merely change perceptions of you?

Overall this is a strong continuation of the series begun in the first novel. I look forward to seeing how this series ends (also as a point for fantasy fans, Daniel Abraham actually knows how to write quality and quickly unlike some other authors I could name...)
Tweet