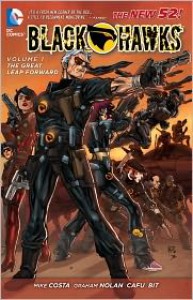 Recently, you may have noticed that I've been on a graphic novel kick. The reason for this is not to help me tackle my reading challenge, I don't need to read a whole bunch of faster books to do that. The reason is that I read what I want to read and I always have. And my interests, like my reading, go in interesting cycles of what I find particularly fascinating. Recently it's been superheroes and science fiction, so I've been reading superhero comic books, watching science fiction shows/films and in general thinking about the concept of the Hero.

This graphic novel, however, met no expectations I had, nor did it even prove to be a particularly strong graphic novel but a mix of different little plots, clearly trying to be emotional in some sense but failing. I admit I'm not a fan of the DC comics 'New 52' movement, though I've heard some positives about those novels they are creating. Nor am I a fan of the DC comics which do not centre on the JSA' or JLA' characters. These two elements could possibly have prompted me to rate this particular mashed up and forgettable novel as a one star work, however that said I did find that this novel was, more or less, superficial.

I can't say anything much about the plot, since it was so tangled that I hardly picked up anything except for explosions, characters belting each other up and gunfire. I feel I can say that the emotion of the characters and the plot definitely lacked and felt contrived or lazy, though I don't feel that calling it lazy is precisely correct.

I will say that on the whole this felt like a sub-par effort entirely and hence the harsh one star rating. Maybe quality wise there could be a one and a half to two star rating salvaged for this, but not today and not from me.
Tweet