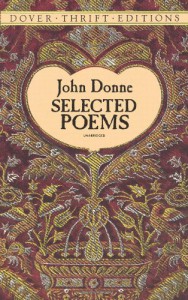 Again, as a disclaimer I have not read this particular edition of John Donne's poetry. I have however read many of the poems found in this edition and therefore find it a particularly reasonable version to use to talk about the poems I read as stand alone works.

John Donne was a fascinating character, with a most interesting mixture of personality types. He was, I think, the type of character that true Christianity was and is meant to attract: he was a religious rebel. Earlier in his life he was a party animal from all accounts, the type of man who loved women and who found no reason why they should not love him back. His earliest poetry, such as the famous (or infamous) The Flea is a symbol of this early rebellion:

Mark but this flea, and mark in this,
How little that which thou deny'st me is;
It sucked me first, and now sucks thee,
And in this flea, our two bloods mingled be;
Thou knowest that this cannot be said
A sin, nor shame, nor loss of maidenhead.
Yet this enjoys before it woo,
And pampered, swells with one blood made of two,
And this, alas, is more than we would do.

Oh stay, three lives in one flea spare,
Where we almost, yea, more than married are.
This flea is you and I, and this
Our marriage bed, and marriage temple is;
Though parents grudge, and you, we are met
And cloistered in these living walls of jet.
Though use make you apt to kill me,
Let not to that self murder added be,
And sacrilege, three sins in killing three.

Cruel and sudden, hast thou since
Purpled thy nail in blood of innocence?
Wherein could this flea guilty be
Except in that drop which it sucked from thee?
Yet thou triumph'st, and sayest that thou
Find'st not thyself, nor me, the weaker now.
'Tis true, then learn how false fears be;
Just so much honor, when thou yieldst to me,
Will waste, as this flea's death took life from thee.

The argument being here that, since the flea has taken blood from both of us already we have already intermingled in some way. In other words Donne was a smooth talker trying to convince a woman that going to bed was fine since they'd already had blood mixed by a third party. Romantic and smooth...or not.

But even when Donne became drawn into 'religion' becoming a man of great importance in the Anglican Church he was a rebel. Which I find fascinating because in many respects Christ himself was a rebel of his times, not caring about convention or even about contention but more about conversion and salvation. The message of Christ is one which naturally broke and breaks cultural barriers and set rigid structures and is not meant to be one of pomp and celebration. And in many ways Donne's later poetry reflects this. His poetry retains that earthy sensuality of his youth but shows a sense of adult maturity and a sense that Donne has become captured by the wonder of a personal God.

I particularly like these three of his Holy Sonnets:

Batter my heart, three-personed God; for you
As yet but knock, breathe, shine, and seek to mend;
That I may rise and stand, o'erthrow me, and bend
Your force to break, blow, burn, and make me new.
I, like an usurped town, to another due,
Labor to admit you, but O, to no end;
Reason, your viceroy in me, me should defend,
but is captived, and proves weak or untrue.
yet dearly I love you, and would be loved fain,
But am betrothed unto your enemy.
Divorce me, untie or break that knot again;
Take me to you, imprison me, for I,
Except you enthrall me, never shall be free,
Nor even chaste, except you ravish me.

There is this fascinating sense to how Donne writes his poetry here. It's almost Shakespearian but he has his own flavour with how he opens the poetry with an eye catching line like: batter my heart. The alliteration of 'break, blow, burn' reinforces the sense of violence as connected to the holy love this poetry is about. And therefore in many ways it all makes for an interesting final line, which shows how Donne ends much of his poetry, with two connected and yet contradictory ideas. There is the sense that Donne will never be virginal unless God ravishes him, yet it makes little sense for one to be both virgin and have been ravished as the poem suggests. Has perhaps Donne captured something as to the nature of God, that the things God does cannot be understood as we understand them - much as ideas exist in the Bible as in Matthew 16:25 'For whoever wants to save their life will lose it, but whoever loses their life for me will find it.'

Death, be not proud, though some have callèd thee
Mighty and dreadful, for thou art not so;
For those whom thou think'st thou dost overthrow
Die not, poor death, nor yet canst thou kill me.
From rest and sleep, which yet thy pictures be,
Much pleasure, then from thee much more, must low
And soonest our best men with thee do go,
Rest of their bones and soul's delivery.
Thou art slave to fate, chance, kings and desperate men
And dost with poison, war and sickness dwell,
And poppy or charms can make us sleep as well
And better than thy stroke; why swell'st thou then ?
One short sleep past, we wake eternally,
And death shall be no more; death, thou shalt die.

This was the first Donne poem I was ever introduced to. It still retains that sense of rhythm, power and awe when I read it again. It has a strong opening few lines and a strong closing line or two with that same contradictory element: sleep to wake.

Spit in my face you Jews, and pierce my side,
Buffet, and scoff, scourge, and crucify me,
For I have sinned, and sinned, and only he
Who could do no iniquity hath died:
But by my death can not be satisfied
My sins, which pass the Jews' impiety:
They killed once an inglorious man, but I
Crucify him daily, being now glorified.
Oh let me, then, his strange love still admire:
Kings pardon, but he bore our punishment.
And Jacob came clothed in vile harsh attire
But to supplant, and with gainful intent:
God clothed himself in vile man's flesh, that so
He might be weak enough to suffer woe.

Finally I conclude with this poem. I find it fascinatingly bold again and the contradictory element here is of how God became weak to be able to suffer woe.

These seem the hallmarks of John Donne's poems: strong and conflict centred openings and strong semantically contradictory conclusions. If you appreciate these aspects and the wild preacher poet behind them then I recommend checking out more of John Donne's work further. He really was an honest individual in many ways...
Tweet