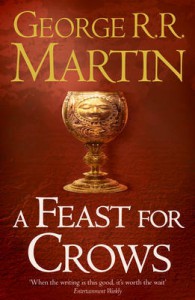 A Feast for Crows is an apt title for a book man fans view as a piece of carrion in a brilliant series. However, I personally found it to be a more readable and interesting book than [b:A Clash of Kings|10572|A Clash of Kings (A Song of Ice and Fire, #2)|George R.R. Martin|http://d.gr-assets.com/books/1358254974s/10572.jpg|3272005] (which, as previously expressed, I found to be a dragging, commercialised novel).

It seems that perhaps most of the disappointment regarding A Feast for Crows stems from the change in direction that G.R.R Martin takes from the brilliant previous novel. In fact this entire novel features no Tyrion or Dany (two of my preferred characters) though it does feature Brienne (Though I think Martin was trying to annoy me by hanging her) and Jaime (who has become a more noble character with the loss of his hand). And what would any story be without a character to loathe? And this novel has plenty of Cersei. The gradual shift of Cersei being a spoiled, power thirsty, girlish woman in the previous novel seems to come to a conclusion in the next. I somewhat hope that the fact Jaime ordered her note burnt means that she will be executed!! I can see why Cersei acts as she does according to the logic of her character but the fact that she's so power hungry that she ignores what her son (as king) wants and is also hypocritical (particularly as regards Margaery) is rather ridiculous.

Again, my review would not be complete without an eyeroll as regards Martin's immaturity. I'm a huge believer that one could be 50 years to 100 years old and still never mature. I believe that maturity is an issue of character development. I don't necessarily see a great deal of maturity in some aspects of Martin's work (or comments - whether it's the almost boastful 'some say this is the greatest fantasy work' comments or others). I particularly see a very juvenile approach to sex and sexuality which is not appealing in the slightest and rather sickens me. Whether it's the need for Martin to gleefully (and constantly) describe what various body parts are doing and the size of various body parts. There's almost a constant need for Martin to return elements back to something relating to body fluids and I don't know about you but that was something I found amusing as...a five year old? Seven year old? And right now it's neither amusing nor pretty to read about. In fact it has a touch of discomfort about it because of how a grown up man is writing about such things. It's not that he is writing about them but how he writes about them. Lawrence Durrell and James Joyce comes to mind as examples of how to write about such things in a mature way.

This all said, though Martin is one of the most popular fantasists writing currently I do not believe he is one of the greatest. Perhaps his story is one of the more entertaining series available now (alongside the longer Wheel of Time - and I certainly consider Martin more conservative in his language use than Robert Jordan, which work - or Mistborn) however when compared to Mervyn Peake, E.R.R Eddison or J.R.R Tolkien, there is no comparison. Anyone seriously rating A Song of Ice and Fire as the greatest fantasy work of all time should go read and re-read the past greats. However, I stand by previous comments that this is a must read work in fantasy for its current impact on fantasy and for what it does with fantasy. I know that I shall be aiming to finish the series myself.
Tweet