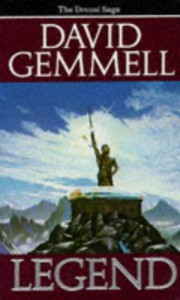 It is unfortunate in many ways that fantasy is such a popularised genre right now. I think that there is a lot of potential for literary critics or for authors to look at fantasy in a literary way rather than producing books which are generic. Fun, but generic. This is what I see Legend as, a novel which is fast to read and plenty of fun but lacks the depth of some other novels. Yet it must be praised as one of the greats of fantasy for what it introduced in its old and fallen hero returning again to face the day.

Legend follows a war, showing how characters adapt and develop according to difficult circumstances and reflects on how one man, a 'legendary' figure, can inspire others. All interesting enough however it was done better in previous books and mythology. I recognise that this might sound like I'm doublethinking about fantasy since [b:The Lord of the Rings|33|The Lord of the Rings (The Lord of the Rings, #1-3)|J.R.R. Tolkien|http://d.gr-assets.com/books/1347257199s/33.jpg|3462456] has ideas done well in previous myth. My argument would be that Tolkien's work is a unique mixture of ideas and far grander than this book which appears written for entertainment only. I think Legend could have been far more. A look at how legends are made and a deeper look at character's psyches. And in many ways it was this.

Yet at the same time the novel relied upon (and added to) the fantasy clichés of the heroic fantasy novel. The romance was one of the weakest wish fulfilment romances I've read in fantasy. And I have read plenty of weak romances in fantasy. And yet, still it features as one of the 1001 novels to read before you die. Perhaps it is because this is a tale which outlives its narrative, much as its main character outlives his own physical body.
Tweet