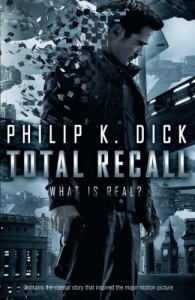 The problem with rating any collection of short stories is that often each short story will differ in quality. Not every story will be breathtaking or reach into the reader's soul and appeal to them on a personal as well as a literary level. There are exceptions (Chekhov i particular comes to mind) however this volume (originally We Can Remember It For You Wholesale) follows the general trend of having several brilliant stories close to the beginning and middle and fading towards the end.

Philip K. Dick, the reader is told in the introduction, was one of those rare writers who was both a readers writer and a writers writer. A man applauded by his peers and equals and loved by the reading crowd. Sadly his stories are not being as widely read today (though [b:Do Androids Dream of Electric Sheep?|7082|Do Androids Dream of Electric Sheep?|Philip K. Dick|http://d.gr-assets.com/books/1327865673s/7082.jpg|830939] and [b:The Man in the High Castle|216363|The Man in the High Castle|Philip K. Dick|http://d.gr-assets.com/books/1347388495s/216363.jpg|2398287] should be), yet it is a mark of his brilliance that many of the concepts he worked with exist as popular films (Bladerunner, the two versions of Total Recall, the recent Adjustment Beaureau as well as other sci-fi classics). One could also mention that Dick was the inspiration behind individuals such as Ursula K. Le-Guin. The point of which serves to indicate that P.K. Dick is a must read science fiction author.

The themes with which P.K. Dick works are often deeply philosophical and psychological and often dark. They are dark because Dick deals with the nature of human realities and questions the human soul. Like all strong science fiction authors he takes ideas that apply to the current world and transplants them into an unfamiliar environment, allowing for an examination of these ideas under the microscope. He challenges the reader to think about how reality is shaped by the understanding of who they are as individuals in The Electric Ant. He challenges how memory and reality connect in the famous We Can Remember It For You Wholesale which is incidentally one of the greatest short science fiction stories devised in terms of its complexity. Then Dick also turns his focus to issues such as abortion, challenging those who consider a legal age to kill an individual as when the soul enters the body in the satirical The Pre-Persons. In The Pre-Persons P.K. Dick creates a world where legally no one has a soul until they turn twelve and are capable therefore of advanced mathematics.

However, sadly, this volume is let down by the remaining stories, many of which fall at two stars or serve as mediocre ramblings. That said the first half of the novel up to The Pre-Persons is easily a four star or five star collection of short stories. As such this collection is fully recommended (though as noted it may best be found under its original title).
Tweet