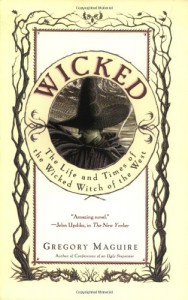 I must state that there appears to be a particular type of novel which does not draw my fancy. Wicked happens to be that type of novel. That said I was expecting more from what I did read.

With such a novel proclaimed as an imaginative retelling of [b:The Wonderful Wizard of Oz|236093|The Wonderful Wizard of Oz|L. Frank Baum|http://d.gr-assets.com/books/1327894516s/236093.jpg|1993810] and a popular bestseller I felt I owed it to myself to give this a try. However I find similar issues with this novel as with the second of G.R.R Martin's A Song of Fire and Ice novels. In other words there feels a deliberate attempt in this novel to aim to write a gritty narrative for the purpose of selling the novel, rather than merely writing a strong story. The story attempts to create a modernist version of Oz but ignores what its origins set out to achieve. Further, it sexualises the world of Oz and adds in elements which frankly make little sense in the storyline or in the context of what it states that it is doing.

In general, my conclusion from what I read of this book in skimming through is that it does not suit my taste. If one appreciates this novel then, well, that is certainly an individual choice. However I for one find it to be a little bit of a commercial gimmick, an aim to rewrite a classic story for the sake of selling novels and spreading an ideology (though I did not read enough to observe that ideology). As such I'd rather read the original tried and true classics rather than a work such as this.