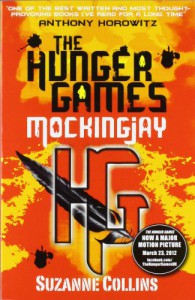 The third book of this incredible series is either loved or hated. I am yet to meet someone who feels in between. I personally place myself on the like it end of the spectrum. For those who don't know that's in yellow and not the red of the light spectrum.

While I accept that this book portrays the worst sides of Katniss at the same time I think that Suzanne Collins made the right choice in ending her book (and writing it) the way it was. It may appear unsatisfying to many readers but I really think that in the end when it comes down to it most people would make the same decisions Katniss makes. She's been in so many battles and wars for crying out loud. If you look up shellshock and read about war you'll see that the endings aren't always what you'd like. Her 'selfish' decision can therefore be understood in a way. She had had enough of conflict (perhaps represented by Gale in a degree) and wanted to have her own choice. I have to question still whether it have been any more selfish if she went with Gale (he seemed a little manipulative at times - I mean he was kind of forcing her to choose between the two of them - in the series for me).

I still think that for me this is a good portrayal of what happens to people when wars and revolution occur. If you want to take a message out of it: don't start any dictatorship under the pretence of your society being a utopia. And then don't dangle a carrot in front of your people's faces. They might realise that the carrot (aka the games) are what is keeping them back from a truly equal and unified society. After all in the end it appears that all the districts are equal but some districts are more equal than others.

As mentioned above there is a lot of love and a lot of hatred for this final book and for this series. My personal opinion is that the entire series is compulsive reading yet hardly the stuff of legend or in other words, them books are no classics. However I like them on the whole and dare to contend that this final novel is the best of the lot.

Where my re-read of The Hunger Games revealed subtle flaws in the novel such as problems in pacing, issues with characterisation and poor writing I saw a finer novel this second time through reading Mockingjay. Yes, the writing is nowhere near classic literary level, however in YA circles I think it's pretty decent. Although those who dislike first person present tense seem to disagree with me. The biggest flaws of Collins are that she shows at times rather than tells and occasionally uses a clumsy phrase. However I think this can be excused and works alright in conjunction with a first person perspective as she uses.

In terms of the plot, while many people find it emotionally unsatisfying (and I certainly think that it is from a 'happily ever after' perspective) it's nice to see a book that works according to its own consistent internal logic. Not to mention that critics had complained that the previous books were 'too vanilla' in their treatment of violence in the games. In this book we have a lot of violent acts mentioned from decapitation; the deaths of young and innocent children, hospital staff and Capitol citizens; and also other suggested tortures.

One major criticism I have of the plot is that many important things do seem to happen elsewhere other than where we can 'see' them through Katniss. I also did find the preaching aspect a touch forced but still interesting enough to hold my attention. Another thing is that the book actually started slower than it finished which is an issue as a book should be able to have a nice pace to draw you in from the start.

I don't pick up the 'Katniss is only whining about things in this book' vibe that others seem convinced about. I do admit that Collins takes a lot of effort to point out that Katniss is mentally tormented throughout the book but with everything that happens it is to be expected.

On the whole, a book that will leave you gritting your teeth about the fact that it ends bitter-sweet. However, fortunately I don't see this book as emotionally cheating or as nihilistic, both of which are things I don't like in books and so I give it another four stars. I think there is the material here to make the best film of the lot also, if handled correctly.

I'm very willing to discuss what people think of the series, the love triangle, the conclusion etc. below!
Tweet