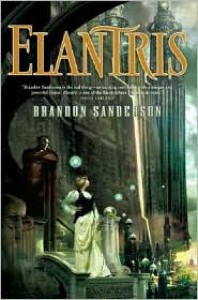 Having just finished re-reading the first ever stand alone Brandon Sanderson novel I ever read it struck me how my view of the book has changed. Of course I always knew it was likely to happen. As such because of the flaws (more noticeable a second time around) I have lowered the rating to 4 stars.

The flaws of Elantris are to put it simply a slow and uneven pacing, the occasion lapse of characterisation, the fact that some characters are thinly sketched out and the use of unexplained deus ex machinas right at the end. That said I fully recommend this book as your first venture into Brandon Sanderson's work if you are at all interested in fantasy or just want an entertaining read without the 'literary baggage'.

The strengths of this book are in the plot (discussed more deeply in my first review) and the depth of the novel. Brandon Sanderson manages to combat a lot of criticisms of modern fantasy in this work by concluding an entire story in one volume and while a lot of his later books have been called shallow fun with readable, yet not brilliant writing, this book is probably his deepest, philosophically. I would love to read a feminist review of the book (and one that did not simply question things like 'are the characters Mary Sues - because frankly I hate the term and fine most characters in some ways have unique qualities that make them interesting regardless) or a review looking at the religious system built into the novel. What I myself find most interesting however is how it looks at pain and despair.

Elantris is a modern version of Atlantis in many ways with Sanderson referencing that myth nicely. Although his version is nowhere near as good as that by J.R.R Tolkien. In his version however, rather than showing a race of people drowned, he uses the idea of a sickness. Another idea it appears to reference is the fall of man as seen theologically in Genesis. This sickness is a curse that brings with it pain, despair and alienation. It is how this 'sickness' is treated that I find fascinating in this book. It reminds me of how the X-Men are treated by humans in the comics and how humans have treated each other in slavery. And yet, the main idea running through this book is that we do not have to be defined by our conditions, that we are only defeated if we let our conditions get to us mentally. This is the idea of contrasting sickness and health, freedom and slavery and alienation and acceptance as only defeating you if you accept them with your mind.

A fine, entertaining book and one with some interesting and relevant themes. There are better books like [b:Les Misérables|24280|Les Misérables|Victor Hugo|http://d.gr-assets.com/books/1327702573s/24280.jpg|3208463] however not everyone will read those books. I hope instead that people can find the themes in those great books in good books like this one.

The premise: a blessing that turned men into gods became a curse that turns men into the undead without a heartbeat and with skin that shrivels in place of the silver skin and hair they possessed before. What follows is one man's quest to discover how and why the curse happened and hence why he has been thrown into Elantris. Where before the curse he would have been immortal and free of all pain he remains immortal but with a body which no longer heals itself. The pain builds up and up until eventually those cursed snap.

In the midst of this plot a religious conflict exists as one man tries to convert an entire city to his religion and prevent war. A princes also strives to work out what happened to her promised husband while trying to fix politics within the city bordering Elantris.

Sound confusing? Well Brandon Sanderson manages to pull together all these conflicting elements, spinning a web of intrigue and magic so dense it's hard not to be drawn into the world formed by his words. Its very easy reading this to see why he was chosen to complete Robert Jordan's Wheel of Time Series because he is a superbly brilliant writer of fantasy.

The story explores incredible themes like rejection, political intrigue, religious extremity, bigotry, xenophobia and a load more. And the story is easy to pick up and read from beginning to end. Trust me this is a book that must be read in order to appreciate the wonders of the fantasy genre.

Not all will enjoy this as much as I did. As a debut novel it does exhibit several typical aspects of other debuts. For instance a tendency to over-word is prevalent. Still it is a finely told story despite any flaws and that is why I loved it as much as I did. If you want to read a city based fantasy that focuses on political intrigue, religion and the idea of what pain will do to people then read this book.

1.I was going to read this but I had to return it for the second time before I got the chance. I guess one day I'll get the chance to re-read and I'll see if my thoughts are still the same.
2.Anyone interested in this book and the theory of fantasy should read this article: http://www.brandonsanderson.com/book/Elantris/page/38/Form-and-Fantastic
Tweet