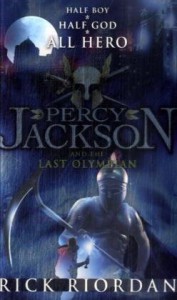 The Last Olympian is my personal favourite in the Percy Jackson series. While many series end on a poor conclusion, leaving fans divided (see [b:Mockingjay|7260188|Mockingjay (The Hunger Games, #3)|Suzanne Collins|http://d.gr-assets.com/books/1294615552s/7260188.jpg|8812783] for instance), this is one of those books that most readers tend to see as having brought about an overall satisfying conclusion. I suppose that this is helped by the fact that where the four books prior to this tend to be formulaic, setting up the series for this conclusion, The Last Olympian takes a different approach. However, something else I saw in this book while reading it, is that of all the books it has the most depth. [b:The Lightning Thief|28187|The Lightning Thief (Percy Jackson and the Olympians, #1)|Rick Riordan|http://d.gr-assets.com/books/1327877746s/28187.jpg|3346751] is a fun book and deserving of five stars in my eyes as one of the finer examples of modern children's literature (a genre incorporating YA literature). However it and the other books are hardly what you could call deep or philosophical. That is until you reach this final novel.

The Last Olympian features a final ultimate battle (at least until you get into the next associated series) between the gods and the titans. As the plot winds down to the final climactic battles so too do the overall themes of the series become apparent in the story. While there may be some occasions that leave you wondering whether Riordan has spread the story a little thin in places or relied upon a simple deus-ex-machina the book does what all good children's stores do: it has magical charm and a redemptive quality.

Parenting: I definitely think that parenting is a theme in the Percy Jackson books. The fact that the demigods tend to only know one natural parent is a source of conflict and heartache for many of the characters. Annabeth has a poor relationship with her father and stepfather which needs resolving in the series. At the beginning Percy has issues with his step-father, coming by this book to accept another step-father as a true father figure and leading to growth in his character. Luke and Nicco are two characters who show what happens when children respond negatively to the lack of a maternal or paternal figure in their lives. In Luke's case he blames his dad (and the gods for everything leading to most of the conflict in the series) and in Nicco's case his attempts to gain favour and insight from his dad Hades lead to conflict for Percy. I quite appreciate these themes as I see in the world around me that a lot of conflict is raised through a lack of parentage when the child needs a parent.

Friendship/love: The power of unity, friendship and love is shown in this series. Grover, Percy and Annabeth are able to brave many dangers because of their friendship. Percy's weakness (that he needs to look after his friends) is also his strength. In our modern world love and friendship has often been perceived as weakness in varying forms however I clearly believe that true love in all guises is the greatest form of strength. Another interesting thing and challenging question posed about love is: does love try and prevent evil things from happening? Many of the gods can foresee events happening for their children but do not act to stop them. My belief is that love allows the loved to pursue their own paths no matter the cost.

Flaws and curses: The Greek gods and their heroes have always had some kind of flaw. The fascinating theme in this series is how those heroes overcome their flaws and how the gods are shown as being very much like mortals, only mortals blessed with immortality and great power. Again curses are plentiful within the series and how mortals overcome those curses is both pivotal and fascinating.

History, gods and circles: The biggest theme in this series is how the past affects the future. Or to say it in other ways how the past returns to the future and the cyclical nature of time. The gods of the past featuring again in the future, the monsters of past books being resurrected again and old ideas being brought up again through these novels. This is why I believe history is so important because it teaches us about the now.

In conclusion my verdict is...

As far as children's stories go I fully recommend this entire series and particularly this novel. I believe that the following series is far grander and superior however I recommend you read these before moving on to have a little back story for the other books. Some people might question my recommendation and high rating. Surely there are better books and better series for kids? Why not try the classics like [b:Peter Pan|34268|Peter Pan|J.M. Barrie|http://d.gr-assets.com/books/1337714526s/34268.jpg|1358908], [b:The Wind in the Willows|5659|The Wind in the Willows|Kenneth Grahame|http://d.gr-assets.com/books/1327869222s/5659.jpg|1061285], [b:Watership Down|76620|Watership Down|Richard Adams|http://d.gr-assets.com/books/1353615493s/76620.jpg|1357456] or [b:Alice in Wonderland|13023|Alice in Wonderland (Alice #1)|Lewis Carroll|http://d.gr-assets.com/books/1166512952s/13023.jpg|2933712]? Well, I do recommend those other books. However I also recommend these. These may not be the best written books, they may give a little too much license to Greek mythology at times and the ideas may not be new. However I remain convinced that we need new stories to arise containing those old ideas in new and better forms - the old archetypes evolving to become more relevant for new generations. And as far as new stories go you cannot go past this: wholesome and redemptive fun storytelling.
Tweet