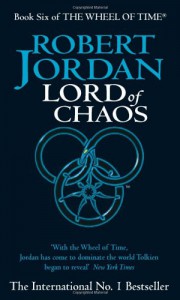 Lord of Chaos is my sixth stop in the thirteen book re-read before January 8th's release of A Memory of Light. I really have little to say about the book at the moment because let's be honest, if you're up to this book and need a review to figure out if you should continue, you either don't have the heart to continue (it doesn't appeal to you) or you want to know whether you should skip this and move onto book seven. Because each of the books is more of the same, only when you've read one Wheel of Time book you haven't read them all, with each book varying slightly in readability, pacing and plotlines. However each book does have similar characters, tone and ideas so if you appreciate one book you should find yourself wanting to read through the series at least.

What I will say is that Lord of Chaos is one of my preferred books in The Wheel of Time. A lot of ideas of great importance are introduced in the previous Fires of Heaven however that book has a lot less happening within it, proving to be more patchy. This novel takes the ideas in Fires of Heaven and does something crucial with them. Not only that but the pacing is perfect for the novel. I don't know many 1000 page novels that I've read in 24 hours (even if it was due to necessity that I finished this so quickly). If you've been reading up to here and liking it this is my encouragement to continue for more good things. Only be prepared that books 8,9 and 10 are around the corner...

Two things about the World of the Wheel of Time that I find interesting:

1. It really is a very matriarchal society in many ways. Yes there are patriarchal lands but most of the power seems to lie in the hands of women. Which I find interesting indeed. It's not your typical fantasy novel which are set in mostly patriarchal worlds (think Tolkien or G.R.R Martin). The hint exists that the world was once very much balanced between men and women but since the male power became tainted women gained the upper hand in terms of power. And in this novel in particular you see a lot of associated themes rise to the surface. Particularly the struggle for men to gain power in this world and for women to maintain power. I see this series as Jordan subtly suggesting that the ideal world would be one of balance and I certainly agree. I hear a lot of people suggesting (implied suggesting at least) that patriarchy should revert to matriarchy. I don't agree. I think we need a society which is more in equality for perfection. And I don't think we can gain it in this solid mortal environment since equality cannot be really grasped easily.

2. The theme of reincarnation. I don't believe in reincarnation, however I find the use of it in fiction fascinating. I particularly like how it's tied to the concept of a wheel of time which goes round and round. This series suggests to me through its use of such concepts an idea I do believe in. That things which 'die' never truly die. Of course I believe human spirits pass on to an afterlife but what I'm talking about here is ideas. I believe old ideas and old concepts rise again and go in a kind of circle. I think many Roman civilisation concepts which we believe died have risen again within our current society. The idea of living lives of gluttony and excess for instance...