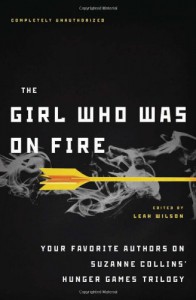 I feel as if I need to defend my stance on any polarising books. Although, as G.K. Chesterton just pointed out to me, if my audience is set in their views nothing I say can persuade them otherwise. Eitherway when it comes to [b:The Hunger Games|2767052|The Hunger Games (The Hunger Games, #1)|Suzanne Collins|http://d.gr-assets.com/books/1337857402s/2767052.jpg|2792775] there is a lot of contradicting perspectives. A lot of people say that it is genius, a lot of people say that it is poorly written. I myself am no huge fan of the writing style necessarily as much as I am of the plot, characterisation and substance behind the book. I always felt that it was a novel with a bigger idea than necessarily the execution but with some smart choices in the plot. For instance choosing to centre Katniss' character around her family in such a harsh world, having Katniss be a character who masks her emotion worked for me, using symbols to tie everything back to Roman mythology and also having Katniss' kill Coin in the end all worked for me. You are completely free to criticise it (not me - I mean why would you criticise me?), I'm merely indicating my perspective. One I tried very much to keep from the hype and subjectivity of fans.

I had no real idea who any of these authors were before reading. I may have recognised the names briefly but most of these authors in this 'unauthorised' anthology aren't writing in the genres I like. The fact that many of them are New York Times bestsellers means little to me either since I don't follow the hype of the bestseller lists. I merely read what I hear about that sounds good. It's a system that works well! So without further ado I present my categorised summary of what I picked up through these essays:

Violence in The Hunger Games

Interestingly The Hunger Games is a contradiction in itself. Its message is one that criticises those who watch children kill one another for entertainment and yet it is written in a way that while clumsy at times I feel is highly compulsive. By that I mean it is written to entertain. I find myself thinking when I hear comments about this novel such as 'really there was hardly any violence' or 'it was too dark.' I question whether we are both too sensitised and too desensitised to imagined violence. For instance the debate surrounding linking video game and movie violence to the rise of physical violence. I don't agree that it is the fault of any entertainment that a person should become more violent since that takes away the personal responsibility of an individual and says 'it was the violence in a tool you used which made you this way.' And personal responsibility is a theme I pick up that is present in The Hunger Games. For instance how Gale comes up with his weapon idea with his reasoning being we should do to the Capitol what they have done to us.

Further on the idea of violence in media and real life I find that it is interesting that we see more 'fake' carnage on screens now than perhaps the Romans ever did in real life. I'm not saying this excuses the terrible things done in Gladiator fights and circuses but it does indicate one thing to me. This being that our innate propensity and desire to see violence be done in some form has never died. I don't think we can see ourselves as morally superior to past civilisations when really our desires are the same as theirs and are simply enacted and dealt with in ways that brush aside the problem.

The way in which the media dominates life is a major theme in The Hunger Games. It was one thing I picked up and perhaps the one thing I latched onto and really liked. I'm always wary of hearing the opinions people recite to me which have come directly from the media. Or even worse of hearing that particularly newspapers, magazines, blogs or tv shows have no bias or agenda. I hate to say it but every opinion piece or source of opinion has a bias. Some are just more visible than others. Unconsciously in today's world much of our lives are dominated by media and it is becoming more and more dominated from earlier and earlier ages as toddlers and infants learn to use tablets earlier and earlier altering set patterns of learning and conditioning. Subtly we are brainwashed by a media system and in some ways it's kind of alarming. In others it's fascinating. And in others still it highlights the need to think and question to yourself whether any opinion is founded in truth or in political propaganda sourced from the media.

Science and to some extent religion

The question has been raised a fair amount: where is religion in The Hunger Games. Well I think that in this make-believe world you find that science has become the kind of religion. Or rather what I mean to say is that the Capitol and the Government have. The idea that man should not mess around with science and create synthetic creatures is one that has been tossed around since [b:Frankenstein|18490|Frankenstein|Mary Shelley|http://d.gr-assets.com/books/1311647465s/18490.jpg|4836639] became a hit. And perhaps even before that if you consider alchemy as a science... Either way in The Hunger Games I see that the Capitol has become like the God of this world and therefore consider themselves free to work with science and their people as they will. Clearly the residents think the Capitol has all the power to crush them as it wills!

The link between The Hunger Games and History

I love the reference between The Hunger Games and the Roman times. I must have been asleep (or studying for exams, or asleep studying for exams) not to realise that Panem came from panem et circences (I mean it was in the book and I missed it). This apparently meaning bread and circuses. In other words a superficial way of controlling the masses. Do you remember that scene in Gladiator (as an aside I love that movie though it has a 'handful' of historical flaws *cough*) when the Emperor reopens the Colosseum and the two senators comment on the smart move the Emperor has made?

" I think he knows what Rome is. Rome is the mob. Conjure magic for them and they'll be distracted. Take away their freedom and still they'll roar. The beating heart of Rome is not the marble of the senate, it's the sand of the coliseum. He'll bring them death - and they will love him for it." - Gracchus, Gladiator

That is what I see happening with the games. People being given entertainment as a form of distraction while also being forced into the games as a form of showing that their dictator holds supreme power. I see the districts as like slave areas and the Capitol as a massive superpower centre of it all.

Finally we move to the topic of fashion and what fashion does. Since The Hunger Games is all about the image presented to the public and the concealment of true identities fashion plays a role in that. I found it interesting to read the essay in this collection which pointed out how fashion can be linked to power through the transformation of identity. I mean think about how Kate Middleton has become known for 'that dress' in a degree? Think of the celebrities who gain popularity through fashion statements. The reference was made to how Lindsay Lohan tries to change her persona through the appearance of dressing neatly in court. I can think of several Australan models who have become known through their fashion, for instance Rebecca Judd who became an 'overnight success' because of one dress she wore to the Brownlow Medal count. And think again about One Direction, Lady Gaga or Justin Bieber. They are not popular just because of their music but through their image. Image is popularity and power in a media crazy world.

An interesting little anthology that is not the best I have ever read but is written in a manner that encourages thought and looks at these books in greater depth. I would encourage fans of the series to read the book and anyone who is not really a fan to probably stay away. Perhaps what I realised now is that apart from its writing the biggest flaw for some people to be found in The Hunger Games book series is the moralising.
Tweet