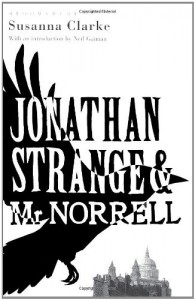 Amazing, astounding, supertastical, brilliant. These are all just a handful of the real (and created) adjectives at my disposal to throw at this book. However I believe that were I to get into an adjective war this book would defeat me hands down with the potency of the words inside. And having done so would commence to bury me in a pile of prose so powerful that I would be diabolically destroyed.

I loved this hauntingly beautiful book. It was well written with the careful and clear strokes of a master artist. A woman who clearly loves words and language and with abounding wit. An author who believed in her world with passion. She wasn't simply writing but creating a world with such clarity.

Jonathan Strange and Mr Norrell focuses on two magicians in the early 1800s as they attempt to bring back the practice of English magic. Introduce fairies, madness and the intricacies of magic and you're not even half way to begin understanding the intricacies of the plot. In fact I doubt anyone can sum up the plot in several words the way that Susanna Clarke writes it.

The real power of this novel is in how Susanna Clarke analyses the two protagonists. Most novels only build half a perspective of who the characters are. In this work the author builds a complex and detailed perspective of who all her characters are. While the two magicians are the most fleshed out, so that the reader may observe their flaws and strengths, even secondary characters are exposed as human beings. These are not half hearted portrayals but rather creations of words designed to show depth and meaning.

But its not simply the characters that reveal depth and intrigue. The world Susanna Clarke imagines is so vividly described that it feels a part of history. In many ways this world is written so that it feels like an ancient true event is being described. The addition of Lord Byron and mention of Mr and Mrs Shelley added to such a tone. The value of an intelligent, resourceful writer who does her research is thus revealed.

So what are the weaknesses of this book. Some would say the length, although I found that the length allowed for such a development of world and characters. Though this is the longest book* I've read from cover to cover stand alone it is one of the best I've read also. I could complain about the footnotes. But they were amazing and added to the depth of the world. Providing details such as book titles, magical theories, tales of magic and magicians of the past expanded the book for me in a nice way. I guess that leaves me to pick faults with the use of shewing and chuse instead of showing and chose. But those obsolete words were used to help create the tone of 1800s England and despite disliking them at first their use grew on me by the end.

This is a magnificent book and if you can get around the length is very much worth reading for all lovers of books. You could always 'cheat' and listen to the audio book version. Although I prefer to use them to heighten the experience of having read the book. However if you are a meticulous reader, or even a quick reader like me I recommend reading another book at the same time. For this is hardly a page turner but rather a book you must slowly devour like a fine dessert or beverage.