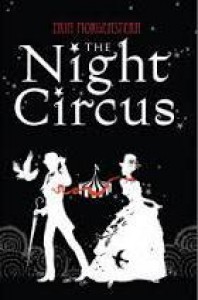 Books and magic are in my mind invariably linked. You might ask why, since not every book will use magic as a plot device - not every story is a fairytale or epic fantasy narrative. However every book tries to have something magical within it, a book must draw you into its world, into the magic of nostalgia, political intrigue, mystery, drama. The Night Circus is a book that thrives on doing this, creating the sense of illusion to draw readers into its story.

The opening line can tell you much about a book. Intelligently Erin Morgenstern chooses to use a simple, punchy sentence to begin her book.

"The circus arrives without warning."

What this line states is that this is a book about a circus. It hints at the fact that the circus is something special. It has a hint of intrigue.

However, tense aside there are other techniques to look at in the story. Firstly there is the pacing of this novel. The pacing, to be honest is slow with plenty of description and adjectives floating through the narrative. Like myself Morgenstern has a clear love of the more unusual adjectives and nouns, relying on words such as nomenclature. However the way in which she breaks into the story with these words breaks the flow of the story at times, and in turn stutters the illusion she tries to generate in her novel.

The Night Circus also relies upon another interesting technique. For the most part the plot follows a linear chronology, yet at times the plot will jump backwards (or forwards) in time to observe a different part of the story through another character. It is in these moments that the perspective often changes from third to second person.

So what is The Night Circus about? The Night Circus is about magic, about dreams and about love. It is about an entire magical world trapped within a circus and characters bound to that circus by a game between two magicians. However don't expect much action, this is a slow moving game, a competition linked to the fact that real magic in our world has drastic effects on other people around the magicians.

“Stories have changed, my dear boy,” the man in the grey suit says, his voice almost imperceptibly sad. “There are no more battles between good and evil, no monsters to slay, no maidens in need of rescue. Most maidens are perfectly capable of rescuing themselves in my experience, at least the ones worth something, in any case. There are no longer simple tales with quests and beasts and happy endings. The quests lack clarity of goal or path. The beasts take different forms and are difficult to recognize for what they are..."

This quote ultimately sums up for me what I think Erin Morgenstern was trying to show in her 'fairytale'. The complexity of stories and the conflict between the 'simple' stories of good and evil, monsters and dragons. Her story certainly has a sense of ambiguity in its characters, though the Night Circus is described as a circus of black and white the characters within it are hard to pin down as 'good' or 'evil'. That all said I do believe that it is not the stories which have changed but our responses to those stories. I don't think people want to read the simple stories because the simple stories of good and evil are often more complex and closer to reality than they realise.

I also feel that she was trying to indicate that it is alright to dream and chase your dreams. Perhaps that may be considered a sentimental idea. An idea too naive for our modern world. However I think that being a dreamer or an idealist is no issue if you're also willing to accept that everything is pretty messed up. That things are often more complex than we realise. Yet, through all the complexity of life I think we still need a dream or ideal to inspire us and keep us all going.

The Night Circus was a novel that I highly enjoyed and yet found a strange novel. I think that to enjoy this further you would have to appreciate the tone and style Morgenstern employs. I personally found that the story's opening and closing was not as strong as the entirety of its middle section. I felt Morgenstern created an alluring tale, one that sustained its illusion well. I personally allowed myself to not question for the most part what the story was doing, rather choosing to enjoy what was presented to me and the complex battle of sides that was presented. That said at times something felt lacking in the novel, though I could not figure out what it was.

I recommend this novel with the warning that it may not be a novel everyone would enjoy. So far I've noted that it tends to be polarising, with people either enjoying it or finding it a tedious novel. The point that I've seen often raised is that the magic is not fun in this novel. if you're looking for fun magic or magic which is interesting this is probably not your type of book. I personally liked the idea of having a contest between magicians who use real magic in our history. However the story idea was perhaps greater than the actual novel in its entirety.