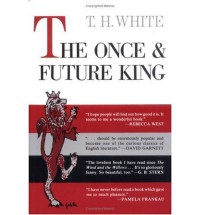 A complex and multi-tiered depiction of the epic Arthurian legend. This book is unlike any other I've read either focusing on the myth or simply in terms of fantasy writing.

While the story begins with The Sword in the Stone, a novel I had already read years ago it was refreshing to re-familiarize myself with T.H. White's eccentric and unique style of portraying the character of King Arthur as a child. In fact I believe The Sword in the Stone is the deepest depiction of the childhood Arthur I have read as many other stories gloss over this. Yet it is important to understand Arthur's beginnings in order to understand his growth of character and this firstly sets T.H.White's work apart from the other tales about Arthur.

White's use of humor and his linking of the myth to the present was incredibly clever. He was in part able to both tell the tale and provide a join critique and analysis of the legend. And such a deep analysis was able to be therefore used to reflect upon the human condition, upon human beings, their wants and desires and what it is that drives them to do such acts as Guenevere in being unfaithful to Arthur. Or as Mordred desiring her as his own. It is a more effective analysis than Freud's simple conclusion that men are simple carnal beings I feel, for what it showed me is that White recognizes that yes few men are truly good but at the same time few men are truly base. It is the way they react to the events of life that makes them ignoble or even noble.

It was an incredibly deep book with so many angles that it simply astounded me. Was it a fantasy, a fairytale to enjoy with magic and well constructed characters? Was it a commentary? Was it a critique? Was it for children or for adults? Was it an analysis? Was it a collection of psychological observations? I believe that this book was all of these and yet none at the same time. It is a book that derives aspects from all of these and yet is never truly one of these alone. For here T.H.White has created a grand epic that I recommend all people read.

However, for all of its depth and magnificence I felt it was let down at times, particularly right near the end. This was majorly due to its pacing. At times it was fast and furious and at others it was slow and ponderous. It never truly was consistent. And for me this made it difficult to get into at times. I would recommend Roger Lancelyn Green's tales of Arthur instead for their pace. However T.H.White's work has a greater depth than any other Arthurian tale I have read and it is for that it is to be admired.
Tweet