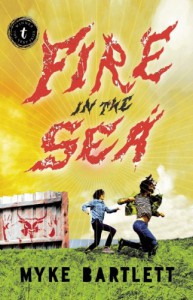 Well here it is, review number 200 for the year. In case you didn't realise that means I've reached my goal of reading 200 books for the year. Which equates to... 65,840 pages read across the year. And this is a decent book to reach my target on too. A quality YA novel by a Melbourne writer.

I'd like to take another moment just to say something about Australia and my heritage. Our history has lots of moments that I'm not proud of but at the same time I'm glad that my ancestors were on the fleets and that I ended up growing up here. It's a "sunburnt country, a land of sweeping plains, of rugged mountain ranges, of droughts and flooding rains" to quote Dorothea Mackellar and I love it. The reason I brought this up is because it seems to me that Myke Bartlett clearly loves Australia too in his own way. His fantasy tale is a solid YA novel set in Australia (and it's one of the few contemporary novels focused around Australia that I've really liked) and it reveals our unique linguistic characteristics and culture quite well without seeming too drawn out. It's a naturally written novel with a unique idea and one which will add to the literature we have produced. Curiously we have produced mainly famous poets and short story writers with one or two bestsellers like Matthew Reilly here or there.

I'd love to say a lot about the story of Fire in the Sea unfortunately that would ruin the fun. I will say that there are Greek mythology elements, reincarnation and some fascinating villains. The plot could be passed off as a typical 'fantasy quest' to recover a mystical item in the fashion of The Once and Future King. However this book is more than that. In its own way it subverts those typical quest elements and adds in other ideas such as reincarnation while quite cleverly using the thought of humanity rebelling against the gods.

All in all an excellent novel set in my own country for once that I've enjoyed. Also a great way to introduce mythology and modern day settings! I'd encourage anyone interested in trying something in the YA fantasy subgenre written with an 'Aussie' tone to give this a go. If you like it then we can talk about Banjo Patterson, Henry Lawson and Dorothea Mackellar!

P.S: I personally must add that I found it hilarious the way the book went on about The God Squad-ers in the neighbourhood as being creepy. I personally know some guys from those groups and they're pretty cool. Another example of why you really shouldn't stereotype or judge people.
Tweet