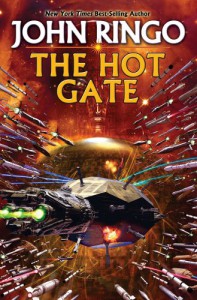 As the third in the Troy series by John Ringo this was again another fine novel. His work across this series has been very consistent and while Ringo may not match literary greats he writes to the best of his ability and writes and entertaining and challenging novel here again.

The Hot Gate continues with the characters introduced in the second book Citadel and shifts attention from the Troy to a second battle station called Thermopylae. What was fascinating in this one is how Ringo focuses on the aspect of how in his world America has been running all the new space programs and particularly on Troy everything is done to their standards. But on the Thermopylae there's a culture mix of Latin Americans and Islamic Pathan soldiers. I loved how he described his character's attempts to get everything into order while entering into the clash of cultures and the idea of 'honour' over 'duty' that some cultures have. His writing allowed me to think about how that we often talk about that we have to have our culture understood without being willing to drop our ground and understand someone else's culture. We are so selfish like that...

Either way a great third novel in this series. I don't know whether anymore are on the way but it did not seem like a concluding novel so perhaps there may be a couple of new novels coming in to finish everything. It was pretty good even if it is or is not over. Very much a series recommended for action adventure fans.
Tweet