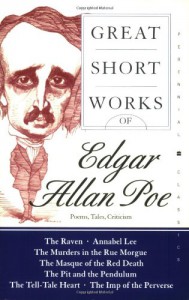 This book has done nothing for me.

I repeat that this book has done nothing for me. Nothing but confirm my absolute respect for the brilliance of Edgar Allan Poe. Where in previous anthologies of the works of Poe I had read only gothic or adventure tales, here I found that his flair extended to a greater diversity of genres. I found that Poe was not only a master dramatist, poet, thriller writer and creator of haunting tales but also involved himself in writing comedic tales. Yes Edgar Allan Poe despite his obsession with the darkness of humanity and psychology knew how to write humorously. It is positively astounding.

I conclude this briefly because there is nothing more to write about the depth of Poe's literary genius. The man was so diverse in his styles and adept at each one of them. Not only that, but his grasp of language astounds me. He was a puppet master of the mellifluous words of English and the other Romantic languages of his time. But perhaps the most intriguing thing is that like his haunting tales Poe was himself an enigma. It is this air of mystery that most fascinates me with the very essence of all of Poe's work. The mystery of the man and the mystery of his emotionally captivating work.
Tweet