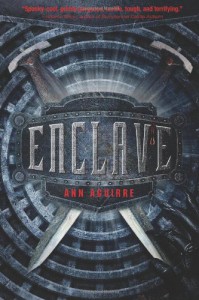 This is the kind of novel I'd describe as: a 'science fantasy post-apocalyptic novel with minor dystopian elements written for Young Adults.' And as such Enclave is a great novel, an entertaining novel. But it doesn't really go anywhere satisfying for me in the end since it's part of a continuing series. Not to mention that elements of Enclave were, to say the least, quite dry and dull, the 'romance' was not terrific at all but seemed like it was thrown in 'because every YA reader loves a good romance' or rather because the author wants to build to something in future books. That's fine but I thought it could have been hinted at rather than blatantly be written with mediocrity.

Enclave is set in a future where human civilisation has been destroyed as we know it. People live on a desolate surface landscape or they seek safety in enclaves underground. Deuce is one of the enclave dwellers and we meet her as she comes into her name-day. This being the day she becomes an 'adult' and is ritually scarred to represent her class in the enclave hierarchy (breeder, builder, hunter). Deuce becomes a huntress and as such is assigned to the enigmatic (and...surprise good looking*) Fade and the two of them work together hunting down and killing Freaks. Freaks are like mutated zombie creatures that have arisen in this holocaust damaged world. Anyway so the plot progresses and eventually works towards kicking Deuce and Fade out of the enclave (turns out the government system of the enclave is not so secure as everyone thinks). What happens after that is a quest for survival.

Enclave was reasonably well written if a little dry in places where you would expect a touch more flowery or emotive language. However that did serve to add a little to the dark, grim atmosphere of the novel. On the whole it's not the best written YA novel I've ever read but definitely better than other YA novels I've read. However compared to the other books I've read recently I'd recommend the Brotherband series and Legend over this.


*Can someone tell me why every YA book seems to have really good looking characters? I mean you never seem to read (save where the character has a defect or disease) that they were plain looking or ugly.
Tweet