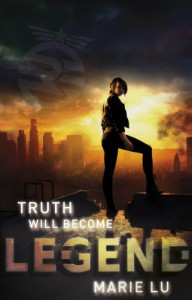 3.5 stars - recommended for a fast paced, fun, YA action read.

Legend was one of those books I thought for some reason had been around for longer, only to find out it was only published last year. I suppose the fact that I've seen it around in loads of bookshops and in plenty of libraries contributed to the illusion of a longer life for this book than it actually possessed.

Legend is no doubt one of those books cashing in right now on the sudden surge of interest in the children's fiction YA sub-genre of dystopian. From a marketing point of view it makes sense to cash in when something is popular, which is why we saw the rise in YA fantasy novels after and around Harry Potter, and the surge of paranormal fiction around Twilight. I just hope there's no marketing surge to do with Shades of Grey's popularity. But that aside no one should be petty enough as to dismiss a novel simply because it came out around the same time as another similar novel, in this case The Hunger Games. It could simply be that the popularity of that novel unearthed an otherwise hidden gem. Without Tolkien's masterpiece we certainly would not have the great fantasy novels of Martin, Sanderson or Erikson for instance.

So now onto Legend. Fortunately in the book world I've heard that titles cannot be copy-written like the actual books themselves (although I'm sure there must be exceptions with say The Lord of the Rings or The Lion the Witch and the Wardrobe), otherwise this book would have to give way to David Gemmell's acclaimed novel (also on my to read list). And this is certainly not a fantasy novel. Legend is instead a fun, fast paced novel that ends better than it finishes begins. It follows two 15 year old protagonists (again why is it that all children's literature books tend to have child characters?) who are on opposing sides of the law in a future world in which America has become torn into a Republic and the Colonies. These two parties are at war against one another and are at war internally as the Republic attempts (like a Communist or Fascist dictatorship) to convince its people that its actions are in their best interest - i.e. to create a utopia in the end once the war is won (well that was all hinted at). The two protagonists are June (a government detective) and Day (a wanted thief). June starts out, set to hunt Day down for the murder of her brother, only she finds out in the end that perhaps things aren't what they seem. And yes there is another YA cliché in that there is a semi-forced romantic angle. But not love triangle...yet.

To conclude I enjoyed this novel in the end. It started slowly but I came to enjoy the present tense first person (diary entry?) style from the two different perspectives. I thought the style of this novel worked better than that used in The Hunger Games as it created more emotional connection to characters. However that said I liked the plot of The Hunger Games more than this book and that's why Legend was not so entertaining. I will read the sequel however when it is available as I did by the end care for the characters and their differing points of view. I feel that I will enjoy the sequel far more as I felt that many elements were rushed or forced in the plot - typical first novel symptoms. However with a little more development the sequel could be even more of an adrenaline pumping ride.