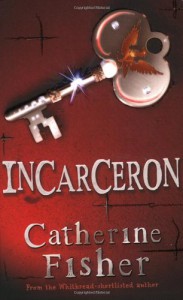 Incarceron is an entertaining science fiction and fantasy novel for younger readers. There are some deep questions raised and some curious motifs that I noted. Ultimately however the tone and style of righting let down the ideas within for me however and I found it rather dry, dull and having an unsatisfying ending. Perhaps I feel that this novel could have been just a little more powerful than it was.

The premise of this unique novel was that long ago Incarceron, a sentient prison was created as a paradise but soon became a place of despair. Outside the prison a Warden was entrusted to watch over it. When novel starts the reader can gain two viewpoints: those of Finn and Claudia. Each are alive many years after Incarceron was created. Finn is a prisoner within Incarceron trying to escape and Claudia is the daughter of the prison Warden. Each attempts to figure out the secret of the prison and reveal the truth.

The most interesting idea in the novel was that of how human societies degrade. The novel suggests that utopias are beyond us and I would agree. Human nature results naturally in us forming distinctions between us and them, we other those who are not us. Further we naturally find some things, values, opinion and people abject. That is we despise those others. In the novel Incarceron truly becomes a prison because of how differences drive everyone apart and cause division. I also found a veiled reference to the garden of Eden. I may be reading too much into this but this quote awoke me to the fact:

"I remember a story of a girl in Paradise who ate an apple once. Some wise Sapient gave it to her. Because of it she saw things differently. What had seemed gold coins were dead leaves. Rich clothes were rags of cobweb. And she saw there was a wall all around the world, with a locked gate."

In many ways the author subtly implies that in the prison the prison itself is God. That those who entered it sought to create a paradise until they saw that what they really were within was a prison. I'm not sure whether it's a thinly veiled criticism of religion for children but the phrasing is highly suggestive that it is. If that's the case then well I naturally disagree with her assessment of the story of Paradise in the beginning. I don't believe Eve saw that things were truly a prison but rather she was blinded to the truth. And that every time humankind goes to try and create a utopia our own flaws, our hamartias*, superimpose themselves. As a result our utopias become dystopias or in the case of Incarceron: prisons.

It was an entertaining read for the most part, lit with questions and ideas that were grander than the book itself and never fully addressed. Still it was far greater than a 'run-of-the-mill' paperback and worth reading for sure.

*unfortunately this word will no longer be one of those only I know thanks to The Fault in Our Stars. How dare writers educate people?
Tweet