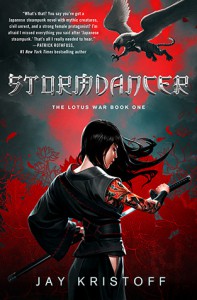 It's August and so I shall finally post a review of this little YA gem. I was fortunate enough to be granted an ARC e-book version of this book and now intend to buy the paperback when it's available. Mainly because I may enjoy the book even more in paper form. But that all said it was worth gaining this early glimpse of a very solid debut novel.

This is a steampunk science-fiction/fantasy novel set in a feudal Japan similar to, but also different from, our Japan. It features technologies powered by the properties of the lotus, technologies which produce a waste that choke the land. Enter the protagonist Yukiko who has been set on the quest to find a fabled griffin in order to satisfy a greedy Shogun. Readers can also expect telepathic abilities, chainkatanas and lotus powered flying mech suits. Add to that the incredibly lyrical and rich writing and you have the makings of a very fine first series novel and I will certainly read the later books in this series.

All in all this is a YA novel to rival The Hunger Games in scope, ideas and execution. Its only flaws are perhaps that it starts slowly and features some well-written but awkwardly placed description early on. However by the end the novel is superior to mostly any YA book currently on the market. And it is written with greater lyricism and with characters readers will care for more I believe. So I greatly recommend reading this novel when it is available.
Tweet