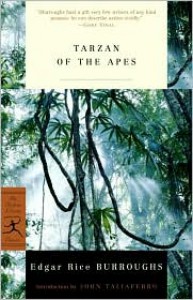 There were several elements of this book that I highly enjoyed. For one the writing was at times vibrant and rich. For another it was an entertaining adventure novel. Although I fail to see why this is on the 1001 list and Fahrenheit 451 is not. Come on list makers pick up your game.

There is little need to talk about the synopsis. Tarzan has been parodied so often and been turned into a television and movie star. The idea of the ruler of the apes has become a kind of modern legend along with similar tales like The Jungle Book and the legend of Romulus and Remus.

As it was pointed out to me. Tarzan is the all conquering British imperialist gentleman of the time. He claims his girl, he defeats the African 'savages' and rules the jungle by might of strength alone. While novels such as Disgrace and Heart of Darkness have been labelled as racist they appeared to be addressing how the racism of the eras they depict was unacceptable. However Tarzan of the Apes is a dated product of its times. It features highly stereotypical characters and shows a subtle support for imperialism. Which today is frowned upon as a negative aspect of our western history.

However I do not take Burroughs to task for his views. Firstly such views are mainly the product of the society he was living in. It is his society which is more at fault and rather through this novel we can see the ideas which were negative and permeated such times. And still affect us in minor degrees because every single person is to some degree a kind of racist. Or rather we all tend to isolate and separate other people into a group of the 'other.' To add to that I believe that we in society hold many views which will later be seen as immoral and vile and as such we should not judge those in the past from the moral high-ground. Until we learn from their mistakes I don't believe we are qualified to call Burroughs a racist and stereotypical 'bigot' and even when we learn I don't believe anyone is righteous enough to judge another human in such a degree. At least consciously. Secondly the reason why I don't judge the author is because he's a fine writer. Yes his work is dated and holds old fashioned ideas but he writes great action tales. And that allows me the chance to excuse his opinions as I can ignore the same in Edgar Allan Poe's writing. Now if it were bad writing perhaps I would be harsher because then this work would seem to be nothing more than an attempt to reveal British superiority but it seems more to be an action novel with such themes resulting from the social pressure behind the author.

Tarzan's adventures are worth reading I found. This was not a particularly long read but neither was it as short as say reading your average graphic novel. This was not the best classic. Neither was it the worst classic. It fell in between as a decent novel full of misinformed ideas. To end on that note for instance the author didn't even travel to Africa for research unlike Conrad. And as such he wrote about how lions were in the jungle along with wolves from a slightly mistaken viewpoint as we now know. But then again a man couldn't really grow as strong as an ape or live like Tarzan so who knows. Perhaps Tarzan lives in a completely made up world and it's really an epic fantasy (hang on, Tarzan isn't real?)
Tweet