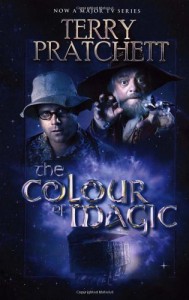 I again find myself wishing that Goodreads offered me a half-star option. In the instance of this story I will grant it the higher of the options between three and four but I would prefer to diagnose it with a three and a half.

It was great, it was okay, it was weak, it was strong. It ebbed and flowed still holding onto Terry Pratchett's unique tone. Like Douglas Adams this tone is a blend of random detail and wit, utilizing deus ex machina elements at times for the sake of comedy.

On the whole it was an enjoyable fantasy and those who like a clever-enough plot that serves the humor of the writer should enjoy this. And what is it in short? A tale of a wizard who tries to escape death and the naive tourist in a dangerous land who he leads around. Only problem is there's a spell stuck in his head...

If that sounds interesting enough read it. I can't adequately describe the book in my review suffice to say it was enjoyable.
Tweet