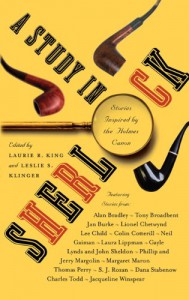 I have heard it said that more books have been written about than by Franz Kafka (although frankly you could almost say that about almost every past classic author). In the same way there have been more stories written about Sherlock Holmes than were actually penned by Sir Arthur Conan Doyle. Here is yet another collection of such stories. Or should I say rather that this anthology contains stories which pay homage to the great detective.

The overall quality of the stories was fantastic, only let down by several of the more unforgettable tales. Yet each story had its own unique aspect and was a worthy story that paid tribute to the aspects of Holmes that each notable writer identified appealed to them.

There was a new Holmesian story told from the perspective of a criminal and another tale retold in part from the same type of perspective. There were several forgotten Holmes' adventures told by Holmes himself or by Dr. Watson or even Mrs. Hudson. And there were those tales set in the modern world which paid homage to the genius of Sherlock Holmes through graphic-story form or plain narrative. Personally these tales which did not include the detective himself were in many ways the greater tales. They were pure crime stories which revealed how the detective has influenced the genre, has established several of London's landmarks or even how perhaps it could be plausible for a criminal to ape on the detective's own enemies in their fiendish machinations.

What these stories did better than any other similar 'fan-fictions' about Sherlock Holmes is to reveal the powerful and intricate nature of the plots. And one of my favourite stories featured Sir Arthur Conan Doyle and indicated the link between the fictional world of Sherlock and reality. Somewhere along the lines Sherlock Holmes has become as real to readers as Jane Eyre or Hamlet. And what these stories do so well is neatly link themselves to the fictional while also remaining grounded in reality and so reveal the power of Doyle's creation.
Tweet