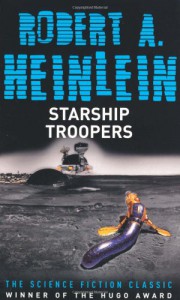 A few things that come to mind that were different between the film and the book:


• In the book Johnny Rico is of Spanish origin (Juan Rico)
• The Galactic War features the bugs but there is also mention of other alien races in the book
• There was no love triangle in the book (there wasn’t any really major romantic angle at all but it actually worked out better that way)
• There are two lashings in the book and Johnny only gets lashed five times (not for killing a trooper but for performing an action in a virtual simulation which would have killed a trooper)
• In the knife throwing lesson no soldier has a knife thrown into his hand (terrible inclusion in the film)
• There is a greater focus on army discipline in the book and there are very few female troopers around where Johnny’s unit is (whereas in the film the female and male troopers live together)
• The destruction of Buenos Aires is in both versions however the book does not mention how it was destroyed by the bugs and the book also only has Johnny’s mother die his father later signs up for the M.I.
• The bugs in the book have spaceships whereas there is no such mention in the film that they do and in the film the bugs have plasma which fires from planets while there is no such thing in the book
• The invasion of Klandathau was still a failure in both versions but for slightly different reasons
• Johnny’s friend Carl dies in the book (not to mention he is not a telepath in the book)
• Johnny’s teacher does not re-join the army and lead as a general in the book
• The brain bugs in the book appeared to be able to be picked up while in the film it was a hulking mass which sucked up brains. These brain bugs in the book could not move unlike in the film.
• The biggest and most disappointing inclusion from my perspective was the lack of M.I armour. In the book the M.I have mobile armour suits which allow strength, protection, communication and firing of all sorts of weapons. A kind of bulky iron man suit in a way.


So what I can confirm from all of that is that the film is a waste of time and that the book is a far better science fiction work and more refined action material. Unfortunately I had to watch the bloodbath of a film for university studies and not read this book – a pity as we could have spent time debating how the film is a terrible adaptation. Perhaps one of the worst I’ve ever seen. Because whereas the film was all about war, fighting and senseless brutality (with all the chopped off limbs, brain sucking and exploding bugs it was pretty much a glorified gore movie) the book was about the art and process of becoming a soldier.

This is apparently Robert Heinlein’s most controversial work. This is due mostly I believe to the ideas he exhibits about discipline which is always a controversial topic and because it reads like an advertisement for the military. In some ways I agree with Heinlein and in others I do not. What I recall from the book that I can agree with is the idea that discipline is a necessary part of humanity. Without it I believe people do not become the best they can.

Those controversial issues aside Heinlein writes a very interesting story. This is a book that deserves a far superior movie than the one very loosely based upon it. As a book full of action and grand science fiction concepts I highly recommend it.