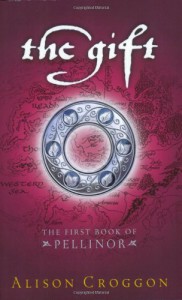 This was an interesting series to me when I read it. It contained intriguing characters and despite having been set in the YA fiction section it read more like it was targeted at a slightly older readership. Its monsters, its world, its villains and its prophecies were like The Lord of the Rings but were their own creature.

I still remember the creatures that were so well described. And the idea of how the titular character's gift worked was fascinating compared to magic systems I've encountered since. It was well written and still haunts my imagination. One day I'll reread them because of their magnificence.
Tweet