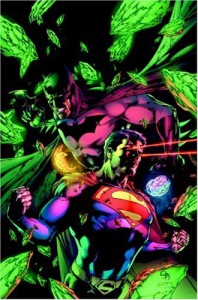 I have decided to begin by stating one important fact. Though I give this graphic novel a four star rating with ease I think that this four star rating for me personally is not an indication of how it ranks in my books overall. For me it is an indication of how it ranks compared to other graphic novels as I have enjoyed them. A four star comic is in no way superior to a 4 star Charles Dickens for instance and vice versa. It is my way of critiquing the different types of medium I enjoy.

That said I found this easily one of the best Superman/Batman stories I have read in a long time. Not only was the storyline superb but the visuals were lush and visceral. And I do appreciate glossy art in superhero graphic novels.

The story follows Superman's attempt to rid the world of kryptonite. Some might say that sounds highly self-serving but it is justified by our hero as his attempt to create a world that he can truly save without proper danger. Several interesting ideas are raised about how people can trust such an invincible hero without a weakness, whether his weakness does humanise him, whether people need a saviour and also who really likes and respects Superman. The ending was particularly enigmatic but I will leave that and many other secrets up to you to find out.

Batman and Superman work together for me because they are in many ways opposites and reflections of each other. They are the two most powerful individuals in their world. They are the most driven, the most determined and they both wear masks even if Superman's is not a visible one. However where Superman believes that all individuals possess some element of good (the truly noble and possible slightly naive hero) Batman is the darker more cynical hero who often draws near to being a vigilante. In many ways they are two sides of the same coin, two different psyches that together form one whole. Superman's pure optimism tempers the Detective's pessimism and allows a more balanced approach.

Either way this is one of the better versions of the Superman/Batman team up. And so if you're interested in DC graphic novels then definitely worth taking a look at this one. I'll give you a teaser: Doomsday is sort of in there. And if you know anything about Superman he is one of few beings truly capable (he did it) of killing the man.
Tweet