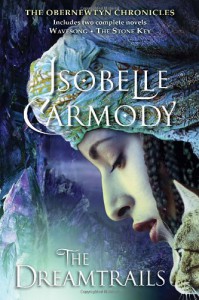 The last time I finished one of the (soon to be seven) Obernewtyn books would have been three to four years ago. As such when I began this massive book (the 1000 pages is one reason I did not get into it years ago) I found my going slow at first as I struggled to re-adjust to the world of the misfits. However once I did I re-found my love and appreciation of this world.

The Stone Key is unusual for a modern day YA novel. It does not move with bristling pace, many of the characters are young adults rather than teenagers and the book is of course 1000 pages long. Add to that the fact that the tone is not quite like that of The Hunger Games or The Maze Runner and you have an intriguing book considering the target audience.

What I found particularly interesting having finished this book also is that it reads as a character development novel more than anything. While nothing much new happens in the story and you lose a lot of the fighting and warfare of previous books this actually added to the storytelling as I saw characters be truly morally and mentally tested (ignoring the fact that they have mind powers of course). As such their maturity developed naturally rather than in a forced manner. What anyone interested in starting this series (from the first book Obernewtyn) is that also this series used the whole female first-person protagonist way before Hunger Games and Divergent hit the block. And I must say that I think this series uses the perspective better than either of them.

What this series focuses on is one misfit (a young woman with mutant mental powers) who finds herself at a misfit house called Obernewtyn and strives to fix the corrupt post apocalyptic government set ups. There are evil councils, fanatical religious movements, an evil misfit and a few different cultural groups. Think X-Men with a first perspective, semi-scifi and semi-fantasy plot. Oh and throw in a prophecy about our protagonist being the Seeker who will save the world by defusing the Beforetime (our time) weapon machines.
Like the sound of that and you are looking for some smarter YA fiction? Then read this. Buy it for 19 or so dollars at your local bookshop.
Tweet