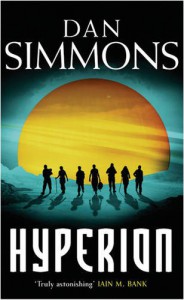 This is not the novel you are looking for...

By which of course I mean that this novel is not what you may be expecting when you pick it up. I certainly didn't predict that the book would be exactly what it was in the end. I thought it was a straightforward classic sci-fi in the same manner as others. By association I thought this meant action, space flight, cool and crazy gadgets and zany characters.

But instead I ended up with something very different. There were gadgets and action but it was limited. The whole story became a sort of philosophical talk about religion, life and machinery. Sure perhaps there were some complex and interesting ideas but I clashed with many of them on a personal level. In particular I really disliked the poet. I couldn't stand him as a character because he was so blatantly selfish.

In the end I guess how you approach this novel and enjoy it will come down to your own beliefs and how you like your sci-fi. It's an interesting read nonetheless but I didn't find anything really special in it. Apart from the Shrike: the killer god machine. Okay he was an interesting invention and so was the concept of time-debt and the time tombs. But apart from that it was at times bland sci-fi with a philosophical bent.

I doubt I'll read the sequel anytime soon. I need to let it rest a while. That said I will be back to learn how this intriguing story ends. And the second time I hope to be fully prepared for the plotting and style of Dan Simmons.