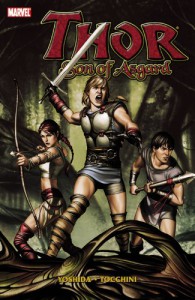 To be honest of all the Marvel characters Thor has always seemed the one most out of place. After all among all kinds of ordinary human beings who become meta-human and alien beings where does a deity fit in?

That is what I loved about this graphic novel. Which ended far too quickly for my taste. It explored the idea of the realms of Asgard and Jotunheim as well as the other mythological places in a way that allowed me to accept them as belonging to merely a different part of time or space. That Thor could be seen as a being from another world rather than merely a distant magical deity.

I liked the way in which the character's petty arguments were emphasised. And in the same way I disliked that very thing. I appreciated how the authors revealed that these are not perfect flawless gods but are more like humans granted supernatural power. However I also found fault with the over-use at times of the arguments between characters to break up scenes where nothing was happening (isn't that what the artwork is for?). Nevertheless it is easier to criticise someone's hard work in putting together any novel rather than to create your own.

The reason this rises slightly above other graphic novels is to do with the glorious art work which combines nicely with the plotting. I gained the sense that this was almost a fairytale or myth created for older more mature readers. And as someone who likes Marvel comics (on the whole) and appreciates mythology and fairytales this struck a nice chord.

So if you are looking for a graphic novel to read in the nearby future you cannot go much wrong with this depiction of Thor. I would go as far as to say it is near celestial in its approach to creating Thor's mythology.
Tweet