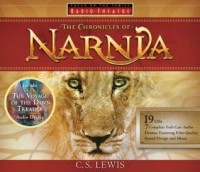 Having just discovered this I thought I might as well review this separately from the actual novels. This being the audio book version that I own.

I enjoy this audio book and compared to others I have heard it is of a decent quality. The positive of it is that I can of course carry it with me on an mp3 player and listen to it in the car or outside the house, enjoying the story of Narnia without the necessity of delving into a book or watching a film.

The sound effects and voice acting are generally very good as benefits an audio version endorsed by Douglas Gresham. He does in fact provide commentary on the series.

What I must comment on as always is how people always negatively downgrade the series for C.S.Lewis's views on religion, race, gender and his general 'Britishness' while perfectly accepting other authors who do very similar things with their writing. It makes me laugh and often I wonder whether such people are simply being too politically correct and stuffy, whether they lack imagination because to be honest there is nothing about the series to do with race or gender that has ever made me think that it was offensive. I've seen more offensive writing being acclaimed by those who would critique it. Therefore the one real criticism which I believe most truly feel about this series is C.S.Lewis use of allegory to display the Christian gospel. Even regardless of my beliefs I still find it odd that people go so fussy over that and yet will accept other supposed myths being presented in novels. Or will criticize Lewis and accept the atheistic Pullman. It seems rather bigoted to accept one and not the other. Still it is such division that makes me realize that Lewis' books are having their effect. They make people think about such challenging questions and that is perhaps why some are offended. Because such questions are too challenging and they resort to prim and proper offense to remove the object of challenge.
Tweet