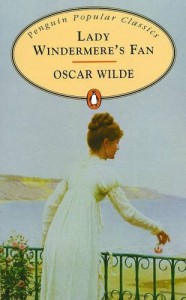 While I really enjoyed this play I found it less amusing and interesting than the other works of Oscar Wilde. So for me this is not a case of the play being worth less than five stars but rather that it is overshadowed by Wilde at his best. For I believe that A Woman of No Importance and The Importance of Being Earnest capture the better part of his mercurial spirit.

Lady Windermere's Fan rather than focussing on the characteristic wit of Wilde's far more famous plays is a smart play. It's plot is well constructed and the characters painted in with a sort of shallowness. That is not to say that Wilde fails to create characters. Rather he purposefully leaves them as half empty caskets so that the reader can perceive how shallow the society of balls and manners really is. In fact that is what Wilde does best and will always be acclaimed for: his ability to make fun of the society of his time. For he did it with his clever understanding of satire so that no one in his audience could feel mocked and yet in a way he did play a joke upon them.

Propriety, is made by Wilde in this play, into a fool's game. Propriety it seems he suggests is a game of airs and shadows. A game which the nobles play at to appear morally superior. However in reality they are all shown in their various ways to be rotten souls. The women are self-righteous and the men are boorish.

I say this is a clever play because Wilde uses a simplistic form of wit. He turns to irony to portray the fallacies of his characters. Lady Windermere, Lord Windermere and Mrs. Erlynne all harbour secrets which the audience is made fully aware of but no other character knows. This of course creates a sense of tension and intrigue and leads onward to a most interesting conclusion. Will they share their secrets? Or will they continue to harbour them? The reader must find out for themselves.

I fully enjoyed this. Yet for the sheer fact that Oscar Wilde has written greater works I found myself not enjoying it to the full five star level it was capable. Perhaps you will disagree.
Tweet