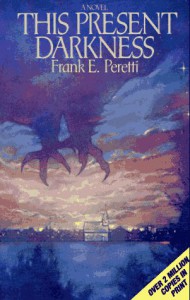 I must honestly admit first and foremost that this is a book I read many years ago and as such I cannot offer properly any views about the quality of writing. That is except to admit while not the worst nor the greatest quality of writing Peretti is in my eyes a powerful story teller (although I must admit in my view his Monster is in some aspects more powerful) and for what he (I believe aimed to do his work is fine).

This Present Darkness is in many ways a thriller but I do not believe that the thriller elements are the main focus of this novel. Instead I believe it is the Christian message that Peretti aims to transmit through his work. After all this is a Christian novel tackling the spiritual world.

This Present Darkness focuses on showing how demonic influence affects the physical world through branching its story into two narratives. The first addresses the issue of what is happening in the physical world. The second reveals the background influence of angels and demons as they guide human beings in order to continue spiritual warfare.

It is the spiritual aspect of this book that I love on the whole however. Because the Bible from my point of view is quite clear on the fact that angels and demons do influence our world in many ways. The power of prayer is revealed in various ways in this book and the power of Jesus name is also revealed.


I disagree with some ideas that this book makes Jesus name into just a magic word because I personally think that too few Christians understand the power in that name and that this book attempts to reveal the power. I also disagree with the complaints I've read about how Peretti aligns New Age mysticism and the demonic realm as it seems pretty clear to me how such things match up. Peretti I believe attempts to show what is stated in Matthew 12:30 which is that “He who is not with me is against me, and he who does not gather with me scatters." (NIV) An idea which applies to spiritual things such as the New Age Mysticism. What Peretti attempts to show I believe is that such things open avenues into which evil demonic forces can work and as such it's best not to have anything to do with them.

On the whole I believe Frank Peretti does an excellent job of making more real those aspects of the Bible particularly mentioned in Daniel and Revelations. Of course I do disagree with some of his ideas but on the whole I don't believe his book was meant to be fully accurate but rather present a depiction and insight into the ways in which the unknown spiritual real affects the mundane. Take the book as you like that is my opinion and mine alone you don't have to agree or disagree.
Tweet