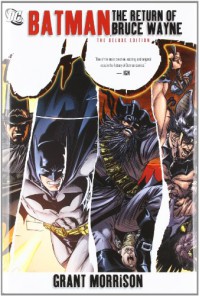 Not the greatest Batman comic in my opinion and by far not the worst.

The major problem with this in the end was that it ended up feeling more along the lines of a Justice League or maybe a Superman comic. What really sets Batman comics apart is the battle with himself not to kill any of his extensive list of villains. However in this novel what you have is Batman moving through time to get back to the 21st century after being hit by Darkseid's Omega Effect. There's also a twist on that whole moving through time involving the Justice League.

However the various time periods encountered all use different artists making for a grand overall effect. Each time period with a different style makes that time stand out as a different era. And shall I say that the artwork is superb. And it was perhaps the artwork which kept me interested in this novel more than anything. Because to be frank it lacked the proper tone to grip me like Batman: Hush.

So I think I'll just say that what this really needed was the Joker.

Just so he could get beaten up by Batman, end up in Arkham (because he's mentally unstable, an element that parodies many real life cases where criminals get off charges on mental instability; often when they're sane) and escape again later. Of course the plot was never going to lend itself to that sadly. And that's probably why I didn't like it as much as I could have although it was well written. It just wasn't a Batman story.
Tweet