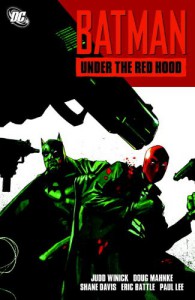 This is a batman graphic novel at near to its finest. And for both fans of the Dark Knight and newcomers this is a must read novel in any form. If you enjoy good versus evil, are interested in the psychology of your characters, like stories with morals or just love graphic novels then you could buy this book from me if I owned it go and read it...

What sets Batman apart from all other superheroes is not simply his lack of any metaphysical powers; the tragic death of his parents; the children he trains as weapons; the gritty nature of his stories; or the various villains he contends with. No rather it has always been his resolve and determination. His spirit to keep fighting the demons of Gotham City and the demons within his own fractured psyche. As a result and in effort to prevent himself slipping to the dark side of the force Batman must prevent himself from killing all the remaining jedi.

And it is this fact that Under the Red Hood portrays so effectively. It brings up elements from batman's past along with twists and turns. You will, as you progress through the story come to see why Batman does not kill and why he is a true hero. But for that you need the perfect adversary. And so the story introduces both a new and an old villain - The Red Hood. Which for anyone who knows their DC history was the suggested identity of the Joker before he became the Joker. So who is this Red Hood? Read the book - I mean graphic novel.

If you're a follower of the series I recommend that you read [b:Batman: Hush|6375845|Batman Hush|Jeph Loeb|http://ecx.images-amazon.com/images/I/51J89RUBYjL._SL75_.jpg|16256422] as this very much ties into the storyline of Hush. However you don't need to have read any previous novels to understand this storyline as cleverly explained as it is by both the written text and the luscious art.

In short if you're interested in gritty stories with depth then this may be for you. Not to mention there is the art to enjoy alongside. So you get a two for the price of one deal with a graphic novel like this.
Tweet