"The lightning made eternal as the light" 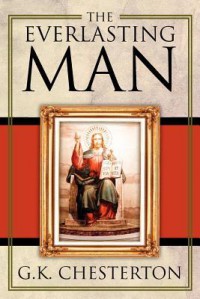 The Everlasting Man is not your typical Christian apologetics classic. I say this because G.K. Chesterton is not aiming to write a pure 'defence of the faith' as it were, but to write a work that better explores the relationship of Christianity to history. It has become something of a fashionable statement to ignore the relevance of Christianity as it pertains to history and so Chesterton sets out to first explore the concept of God and his role as more than merely just another aspect of mythology and then to explore the relationship between God and man as seen in Christ.

Chesterton makes strong arguments and bold arguments. In doing so he highlights the importance of sticking to one's beliefs. That is why I hold onto my beliefs whether they are...fashionable or not. If I allow my views to merely sway with the breeze of popularity, then what kind of truths do I really believe in? In other words, Chesterton explains the necessity of holding fast to Orthodoxy for himself - a view which others can take to heart. Too often when situations arise in modern society the response of an individual is to change their world-view to accommodate such a situation, when perhaps one should change the response and not the view. Otherwise, all it says is 'I have no strong conviction.'

Chesterton makes use of his skill with paradox with such statements as: "Nero could not hire a hundred Christians to be eaten by lions at a shilling an hour, for men will not be martyred for money." There is a sense through Chesterton's writing that he aims to show how Christianity is not another mythology but something different in history. There have been many creation stories, yet how many religions feature the Creator becoming one of his own Creations to save that Creation? That, Chesterton notes, is an interesting kind of paradoxical situation in itself.

Perhaps my favourite quote from this work is found on page four: "When the world goes wrong, it proves rather that the Church is right. The Church is justified not because her children do not sin, but because they do." To me this is perfect in that it explains the one thing I often feel like explaining to people. They look at Christians and Christianity and believe it is about morality or ethics, but the gospel is not a tool for purely creating 'good' or 'morally right' people. As Romans 3:23-24 states "23 for all have sinned and fall short of the glory of God, 24 and all are justified freely by his grace through the redemption that came by Christ Jesus." The church should be full of people just as hurt, broken and failing as the world, and it is when the church contains such people that the message of the gospel should be seen...

Of course if you've read this far through my review you'd be aware that this is a book aimed more at Christians or those actively seeking answers to life from various viewpoints. I find that Chesterton is the best writer I have discovered at providing logical and sound reasons for belief. And in doing so he shows that Christianity is special and that faith and logic are not so different as some may believe.