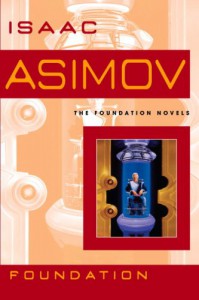 Violence is the last refuge of the incompetent

Let me explain that Foundation like any other Asimov work I have touched (very few), is a work of ideas more than personal connections to characters. You will hardly find your loveable character types who you can 'ship' together or create t-shirts for a fandom for. It simply is not that type of work. It is a work of classic science fiction, which means that the interesting characters which do exist, exist for the purpose furthering a selection of specific scientific, logical, fantastical, theological, philosophical and psychological ideas or other ideologies.

The plot of this novel is spread across different sections of galactic time in a far distant future. A future so distant that humanity has forgotten the planet Earth and where it came from to create the Galactic Empire. The novel begins with Hari Seldon gathering together a large group of scientists for the purpose of performing research connected to his new science of 'psychohistory'. This psychohistory enables Seldon to reportedly through logic predict the demise of the Empire thousands of years in the future. Because of the threat such ideas pose to the Empire, Seldon's scientists are exiled off to Terminus where the Foundation is created to publish the Galactic Encyclopedia - a work which categorises all known scientific information. However Seldon's true plan, as shown fifty years further into the future, is rather different than merely being to create a universal Galactic Encyclopedia. And so the true purpose of the Foundation is uncovered piece by piece.

There are three key ideas within this novel that I wish to discuss. Firstly is the idea relating to the idea of information. The Galactic Encyclopedia is created to categorise known information and many characters pose the case that this is what science is about. Others however argue that science goes beyond mere categorisation of previous knowledge but about making new discoveries and increasing the limits of the knowledge and information that we currently possess. And hence the concept of the stagnation of science versus consistently pushing the boundaries is discussed. And the question is implied in its own way: how far is too far when pushing scientific boundaries? It is a question we must even ask ourselves now in an era of genetic experimentation and technological advancement.

The second idea is also related to science. This is the concept of a religion of science existing. In many ways I believe such a 'religion' can and in some small ways does exist. This is an idea which ties into the previous one for me. When I talk about the concept of religion I do so with my definition being one built around the rituals of religion existing alongside worship of those particular rituals. Many make the definition of religion being about worship of a god but what is a god except something that is worshipped? When science or any material item is worshipped it becomes a kind of god and a new religion is founded for the individual.

So when I talk about the existence of a 'religion' of science as shown in this book, I talk about the concept of blind faith in how science is used by individuals. Science itself is less flawed than the men and women who practice it and scientific results can be twisted to provided particular results. It should be up to the individual to question therefore how science is used - and I believe that Asimov subtly prompts his readers to consider this concept of blindly believing in infallible miracles of science. Particular given that he wrote in an era that had just discovered the power of breaking the atom.

The third concept is the concept of empire. I believe that all authors at their best write what they know in some degree and can often tie their novels into some aspect of reality. In many ways it feels that Asimov's concerns about the rise of two Empire powers during the Cold War (America and Russia) are shown to the reader through this novel. Asimov however takes a historian's approach to this information and suggests that Empires are almost necessary across history. Further he suggests that the breakdown of Empires can be as messy a business as the creation of those Empires. This can be seen in the breakdown of the British Empire in relation to India, America or even South Africa (the fall of apartheid) and the fall of empires as seen in the Two World Wars.

I included the headline quote above this review because of all the numerous points made within this book it held the most emotional impact for me as a reader. However I believe that not only is violence the last refuge of the incompetent but I believe it is also the first resort of the incompetent. Violence seems to be the tactic that the weak and bullies first resort to to solve problems rather than aiming to settle with peace. I saw the Mandella: A Long Walk to Freedom film yesterday and it reminded me of this concept - Mandella's last refuge was not violence but peace and the love associated with it. It takes a strong person to take refuge in such things but a strong individual is also a competent one.

On the whole Foundation is a great novel full of brilliant ideas. I have always appreciated brilliant ideas as much as sweeping plots and it is perhaps for this reason that I loved reading this novel. It is a true classic and worthy of being considered the greatest science fiction novel I have ever read.