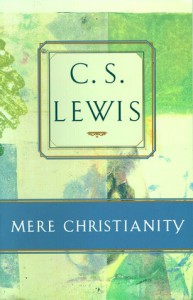 “I am trying here to prevent anyone saying the really foolish thing that people often say about Him: I’m ready to accept Jesus as a great moral teacher, but I don’t accept his claim to be God. That is the one thing we must not say. A man who was merely a man and said the sort of things Jesus said would not be a great moral teacher. He would either be a lunatic — on the level with the man who says he is a poached egg — or else he would be the Devil of Hell. You must make your choice. Either this man was, and is, the Son of God, or else a madman or something worse. You can shut him up for a fool, you can spit at him and kill him as a demon or you can fall at his feet and call him Lord and God, but let us not come with any patronizing nonsense about his being a great human teacher. He has not left that open to us. He did not intend to.”

I am somewhat confused about some of the reasoning behind those giving this work one or two stars. From what I have seen it appears to be that C.S. Lewis does not justify his explanations well enough - that there is not enough of a burden of proof that he has fulfilled. Or that his writing, his work, is far too offensive.

For the first, I believe that those who read this work expecting to see some kind of justification for belief will be disappointed. Lewis himself explains that what Mere Christianity is about is more of an explanation of what all Christian denominations hold to be truth - it is not so much an argument for why these are held to be true. As for Lewis being offensive - yes, yes he is. For that matter, so is Christianity. Christianity should be so offensive to modern thinking so as to be near inconceivable - but that does not make it any less truthful. Nor does it mean that Christians need to be offensive.

Lewis is of course far more readable (and likeable) than Friedrich Nietzsche, yet I feel they are two sides of the one coin. Both view the issues in their modern societies and reflect critically upon them. However, where Nietzsche always asserts his views in first person as if they are fact (where they are opinion), Lewis works his way through his reasoning in the third person - questioning rather than asserting. They are both equally aggressive (and depending on your values as I said, offensive) but one sees Christianity as all that is wrong in this world and the other sees the world as all that is wrong in this world.

I was talking to my father the other day when I said that "I think the funny thing to me about most academics at University, is that they so completely misunderstand Christianity. They think it's about becoming 'good enough' to get into Heaven." To which my Dad turned around and agreed saying, "That is because most churches don't understand Christianity well enough and keep preaching works-based repentance."

For anyone not understanding what I mean by 'works-based repentance', it should be the assertion of every believe that is is by faith that you are saved. However, far too often Churches end up preaching a confused gospel that states something like 'it's a little bit of faith and the rest is you doing stuff to make you good enough'. No. It's all meant to be faith - with anything else stemming from faith.

As Lewis says here in Mere Christianity: "For mere improvement is not redemption, though redemption always improves people even here and now and will, in the end, improve them to a degree we cannot yet imagine. God became man to turn creatures into sons: not simply to produce better men of the old kind but to produce a new kind of man."

Lewis is full of these kinds of quotable statements throughout the book as he explains not why he believes, but what he believes. G.K. Chesterton is a much better source (in Heretics and Orthodoxy for looking into 'why' someone believes - but at the core of it all is of course pure faith - based upon the rational but appearing irrational).

"The Christian way is different: harder and easier. Christ says 'Give me all. I don't want so much of your money and so much of your work: I want You. I have not come to torment your natural self, but to kill it...'"

It is statements like these that show the confronting nature of Christianity. As Lewis says elsewhere in the book, Christianity is a fighting religion. And in a world that tries to destroy its held truths, it needs to be. As Lewis explains, merely because something is offensive does not make it any less true - and relegating it down to the 'nice moral principles' is no way to go either.

Lewis begins his book by first addressing the concept of 'fairness' and 'foul-play'. He explains that we all have within us, a notion of good and evil, a notion that he calls the Law of Human Nature. He combines this with other ideas to explain the concept that humanity is essentially flawed - that something is not right. By stating this he therefore continues to explain that there is a need within all of humanity for spiritual help. A need that he continues to expand upon throughout the rest of the work, explaining that Christianity serves to address and answer that need.

There is even an address about morality and Christianity, whereby Lewis explains that Christianity is not merely a moral religion, but that there are morals that are connected to being a Christian. He discusses things like: prudence, temperance, justice and fortitude - the 'Cardinal Virtues' and the great sin of pride (establishing yourself above others). He explains that prudence means common sense - the idea that Christians should not be unintelligent by any means (though so many appear to be - judging by all the 'you will burn in hell for this' comments you can find on Facebook or instagram) and that temperance is not about complete abstinence. After all, alcohol and sex were created by God. The issues come when, as Lewis so clearly explains, you depend upon such things as a crutch to get you through life, where you have an unhealthy interest in them - that is temperance. Justice and fortitude mean respectively fairness and courage.

Essentially this is a book of complexity and simplicity - much like Christianity itself. Anyone looking for a resource to affirm faith and to help you consider the questions which Christianity attempts to address should think about reading this work. It's one of the better works I have read by any Christian author and definitely a classic of faith. Lewis makes Christianity open and easier to understand - he truly shows mere Christianity as it should be, most denominational and individual beliefs aside.